AFP: French human rights activists campaigning for the freedom of a Iranian mother who was convicted of adultery say they fear she could be stoned to death as early as Wednesday. 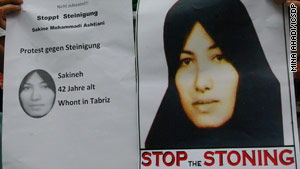 PARIS, November 2, 2010 (AFP) – French human rights activists campaigning for the freedom of a Iranian mother who was convicted of adultery say they fear she could be stoned to death as early as Wednesday.

“Sakineh Mohammadi-Ashtiani could be threatened with execution tomorrow,” said a statement Tuesday from the French magazine “La Regle du Jeu”, which is run by Paris’ best known philosopher, Bernard-Henri Levy.

Ashtiani’s supporters planned to hold a demonstration outside the Iranian embassy later Tuesday, to protest what they see as Tehran’s unfair trial and inhumane punishment of the 43-year-old mother-of-two.

“A letter from the Tehran supreme court has been sent to the sentence application department at Tabriz prison, authorising Sakineh’s rapid execution,” the group alleged.

“Since death sentences are carried out on Wednesdays we can only be terribly worried for Sakineh today,” it said.

Ashtiani was sentenced to death by two courts in the northwestern city of Tabriz in separate trials in 2006.

The first sentence, death by hanging for her involvement in the murder of her husband, was commuted to a 10-year jail term by an appeals court in 2007.

But the second, death by stoning, was on a charge of adultery levelled over several relationships, notably with the man convicted of her husband’s murder, and was upheld by another appeals court the same year.

Since July, Iranian officials have said the stoning has been postponed in the face of an international outcry that has seen strong representations by the French and Italian governments as well as the Vatican.

But a foreign ministry spokesman told reporters on September 28: “The judicial process has not finished and the final judgement will be announced after the end of the process.”

Iran’s Threats to US May Prove Costly to Iran