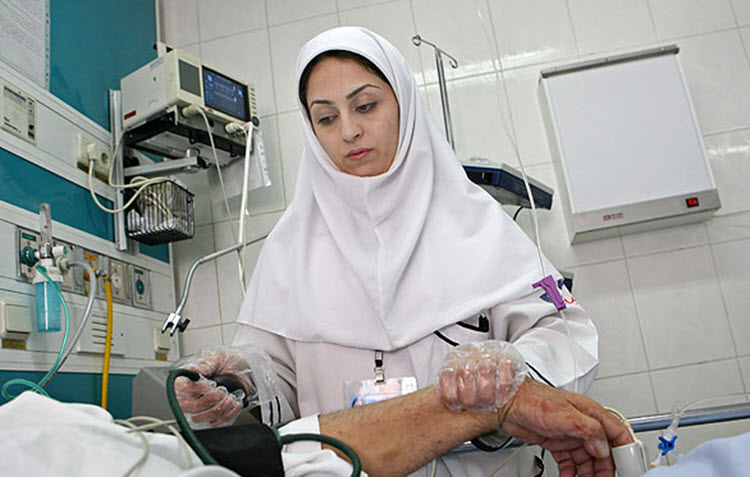 London, 15 Jun – Fifteen nurses in Iran died at work in 2016 due to overwork and stress, according to the deputy leader of a national nursing organisation.

Dr. Jaleh Ezzati, a deputy in the Organization of Nursing System, was giving an interview on the tough working conditions within Iranian hospitals and the troubles faced by female nurses, when she revealed that 15 nurses died during 2016 because of the appalling conditions they have to work under.

Ezzati said: “Last year, 15 educated nurses died while at work. All of them worked [double] shifts due to work pressure, shortage of staff, and a strong need for funds… Having to work overtime and these sorts of pressure leads to the death of some nurse in some province all the time. The latest example was in Kerman Province, where a 35-year-old nurse had a heart stroke at the hospital.”

These are nurses dying on shift in hospitals, because the Iranian Regime is forcing them to work under such stressful conditions and not implementing any procedures to combat it. One nurse dying on shift is too many.

Why are nurses so overworked?

Simply put, there is a major shortage of nurses. Even though the number of nursing school graduates holds steady, there are fewer people entering the profession.

First, the salaries of nurses is much lower in comparison with doctors even if they are doing the majority of the healthcare.

Ezzati said: The difference in the salaries of a nurse and a doctor in 99 per cent of countries, is three folds at most. In Iran, however, the difference is 100 folds. We have even had [doctors’] payrolls that are 500 times greater than those of nurses. This is while many doctors say that they receive only the fee for visit or for surgery. They leave and all the work must be done by the nurse. In such circumstances, nurses cannot receive the salary they received eight years ago while the salary of their colleague is over 100 or 500 times more.”

Second, many female nurses are not able to get an employment license because, as released by Human Rights Watch, women in Iran need their husband’s (or closest male relative’s) permission to work.

Third, many nursing school graduates are appalled by the current healthcare system and are reluctant to work in an industry where you could die on shift due to work-induced stress so they are often emmigrating to a country with better working conditions.

Ezzati said: “We have documents that 97 percent of nurses are deeply dissatisfied with the country’s health system. The number of nursing graduates is not small, however, there are many who do not get employment licenses after graduation. Presently, many of the graduates decide to emigrate.”

She continued: “Our research shows that immigration of nurses has grown 300 folds. When nurses see that doctors receive 300 folds more in salary, they would no longer respect them. The amount of work is so much that they see no reason for staying. They just leave everything behind, and leave.”

Nurses in Iran often also have to do a lot more work than their international counterparts, which does not benefit anybody.

AFP: Iran's decision to resume some of its sensitive...