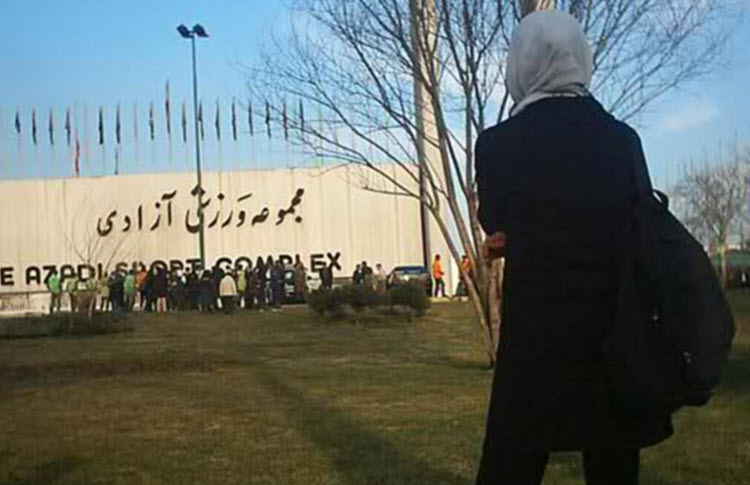 London, 02 Mar – Iran has detained 35 women for attempting to attend a football match on Thursday, March 1.

The match, between Tehran teams Esteqlal and Persepolis at the Azadi (Freedom) stadium, was being attended by FIFA president Gianni Infantino, and Iranian Sport Minister Masoud Soltanifar, which is why women’s rights activists called for female football fans to attend.

They believed that this protest against the sexist ban on women attending men’s football games, which has been in place since the mullahs took power in 1979, would have extra prominence with Infantino there and attract the FIFA chief’s attention to the issue.

Women’s rights activists stated that the ban was an infringement of women’s basic rights, mocked the hypocrisy of “naming a stadium freedom but banning half the population from entering”, and said the protest was “the best chance to break the [39]-year-old taboo”.

Seyyed Salman Samani, an Iranian interior ministry spokesman, said that these women were not arrested, but transferred to a “proper place” by police, temporarily held, and released after the match.

However, earlier reports said that two women were held.

When a journalist asked Soltanifar, who was stood next to Infantino, when women would be allowed to attend football matches, their live broadcast was immediately taken off the air.

This is far from the first time that Iran has prevented women from attending football matches, even with the eyes of the world on them.

Back in September 2017, women protested outside Azadi Stadium because they were not allowed in to see Iran’s World Cup qualifier against Syria, despite having pre-ordered tickets.

One female football fan tweeted: “They did not let us in the stadium, took pictures and videos of us and threatened to arrest us. They then collected our tickets and took them away.”

To add insult to injury, female Syrian football fans were allowed in. Some police officers who felt bad for the women, even recommended that the women carry a Syrian flag to try to enter.

These women’s tickets, which has been sold the previous week, were issued by mistake according to Iran’s football federation, who offered to refund the tickets.

Ghoncheh Ghavami, a British-Iranian woman who was detained for four months after attempting to attend a men’s volleyball match in 2015, urged female fans to keep buying tickets for the match in protest at the ban.

She tweeted: “The empty seats will represent our voice.”

Closing Strait of Hormuz not so easy for Iran-analysts