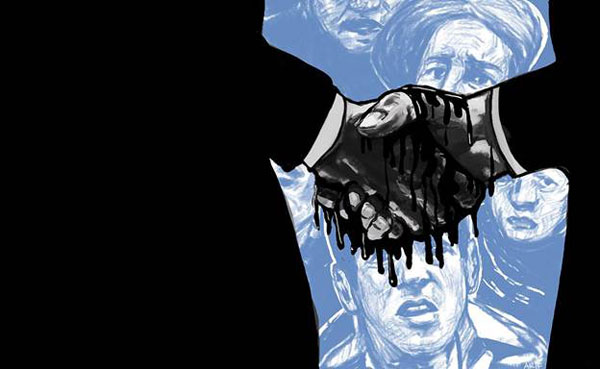 Now that a supposed “historic” framework of political understanding has been reached between Iran and the international community, it may be worth looking at the role played by the Iranian regime’s lobby in the United States, and what its actual interests are.

I’m speaking of course of the National Iranian American Council or NIAC, which has been in the news recently after it lost an embarrassing court decision, and was sanctioned for legal misconduct, including withholding evidence of its lobbying activities from the court.

To no-one’s surprise, its notorious talking head, Trita Parsi, was all over the nuclear talks in Lausanne.

Of course NIAC has fought long and hard to achieve two things, present the pariah regime in Iran as a friendly partner to the West, and to fight tooth and nail for the removal of sanctions against the regime. Their agenda does not include the promotion of human rights, or exposing the vast inequities in everyday life under the ruling theocracy. Although it has sought to cast itself as an Iranian-American organization, one can identify its real interests by those who benefitted the most from the positions NIAC has fought so hard for.

We can start with the Supreme Leader, Ali Khamenei, who has endorsed the deal, and all signs indicate that he stands to benefit from the deal. There is little reason to believe that Khamenei is not celebrating the nuclear deal as a strategic victory for the regime, particularly in relation to gaining economic relief.

While NIAC has sought to nominally distance itself from Khamenei and his retinue, the facts speak otherwise. During his trip to Lausanne, Parsi was photographed by Revolutionary Guards’ news agency, Fars News, cozying up to Hossein Fereidoon, brother of Iranian President Hassan Rouhani.

Iran’s chief negotiator, Javad Zarif, has been extensively linked to Parsi. Both have been working hard on the same goals, namely selling the West on just how friendly and amiable Iran regime can be. According to information released in NIAC’s failed lawsuit, for a long time Parsi communicated and coordinated his activities with Zarif.

The Iranian Revolutionary Guards have also indicated support for the nuclear deal. It should also come as no surprise that Parsi has shown no scruples by advocating against designating the IRGC as a terrorist organization.

Earlier this year, Parsi went on record claiming that Iran’s Supreme Leader would be the biggest loser of any nuclear deal with the United States. This narrative of course stands in direct contradiction with a report by Reuters: “One of the chief beneficiaries of this week’s easing of Iranian sanctions is the country’s ruler – Supreme Leader Ayatollah Ali Khamenei.” Supreme Leader, much like Parsi and many of NIAC’s backers, stands to gain financially from the suspension of sanctions on Iran.

Other beneficiaries include the oil lobby. Bloomberg recently ran an article entitled; “Iran Riches Coveted by Big Oil After Decades of Conflict,” discussing just how eager the multinational firms are to engage with a regime which runs its state run oil industry for the benefit of Khamenei and those in his Mafia. “Iran is the big prize,” said Oswald Clint, an oil analyst at Sanford C. Bernstein & Co. NPR reported “Framework Nuclear Deal Could Be Good News For Iran’s Oil Sector”. The regime of course uses the oil money to fund its terrorist activities abroad, and enrich its ruling mafia.

Iranian journalists have documented Parsi’s former links to Iranian oil businessmen in the past, which raises questions as to just who and what NIAC is lobbying for. Although Parsi has sought to paint his opponents as anti-Iranian warmongers, the truth is that one can readily support human rights and democratic change in Iran, while opposing both war and appeasing a totalitarian regime.

While Parsi claimed that the biggest victor of these negotiations were the Iranian people, one need look no further than the public executions in Iran to see the grim reality for those who live under such a barbaric regime. It should also be abundantly clear that political developments which strengthen the theocracy in Iran are not in the best interests of the Iranian people.

Now that a so called “historic” agreement has been reached, it will be interesting to see how Parsi spins this victory as a defeat for Khamenei, despite the fact that the latter has final say in all of these matters. What should not be in question is exactly what interests and goals NIAC serves.

*Hamid Yazdan Panah is an attorney focused on asylum and immigration in the San Francisco Bay Area. He is also a human rights activist focused on the Middle East and Iran.

Iran and Iraq to join to seal border against insurgents