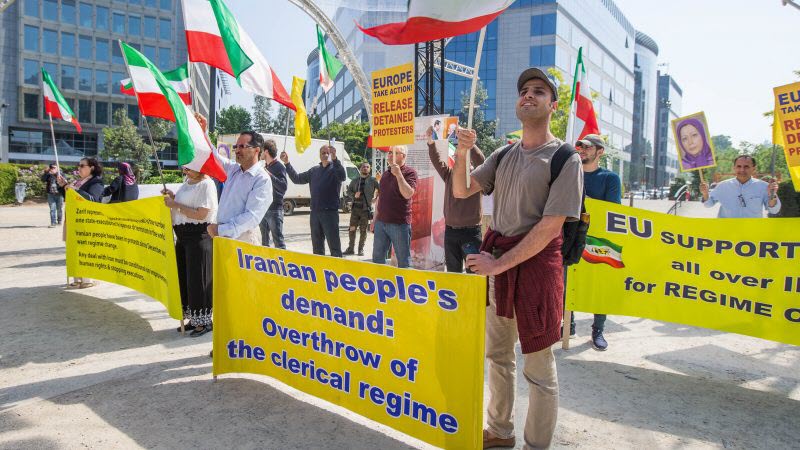 German authorities also arrested four individuals and the mastermind of a plot to set off explosives at a large gathering organized near Paris by the Iranian opposition.

High-ranking Iranian diplomat Assadollah Assadi was extradited to face charges in Belgium along with the operatives to whom he had provided the explosives.

In Albania, two Iranian operatives, who were allegedly plotting an attack on the home of roughly 3,000 members of the Mojahedin-e Khalq (PMOI/MEK), were arrested last March. The MEK is the group blamed by Iranian government officials for the anti-government protests that have rocked the Islamic Republic throughout the past year.

These plots have alerted European authorities to the increasing Iran-backed terrorism. The French government imposed sanctions on the Iranian Ministry of Intelligence and some of its known operatives after an investigation that left no doubt about Tehran’s culpability for the plot that targeted the National Council of Resistance (NCRI) gathering was completed. Last month, these sanctions were adopted by the rest of the European Union.

Along with France and Albania, the Netherlands also expelled Iranian diplomats in 2018. A spokesperson for the Belgian judiciary alleged that nearly all Iranian diplomats are in the employ of the Iranian secret service.

The Iranian authorities are reported to be holding high-level talks with the Taliban in Afghanistan. Iran’s Shia theocracy is said to have a history of forming partnerships with Sunni extremist groups based on their mutual antipathy toward the West.

The ongoing anti-government protests in Iran should raise concerns regarding the regime’s behavior at home and abroad. The United States has been actively encouraging the EU to consider making a shift. When he hosts an international summit on Middle Eastern affairs in Warsaw on February 13th and 14th, Secretary of State Mike Pompeo will try to enlist the assistance of the to take the threat of Iran seriously.

The Warsaw Summit could help develop a strategy to contain Iran. Such a strategy must also reach out to Iran’s organized domestic opposition.

The European Union must realize that the policies of appeasement have only exacerbated the threat of Iranian terrorism on European soil. The EU must point out the existing regime’s illegitimacy and stand behind the opposition.

Ahmadinejad: Iran-U.S. dialogue on Iraq will be conditional

By Jubin Katiraie “In next year’s budget, the government intends...
Blog

A Frustrated Attempt to Whitewash Terrorist Mullahs in Iran