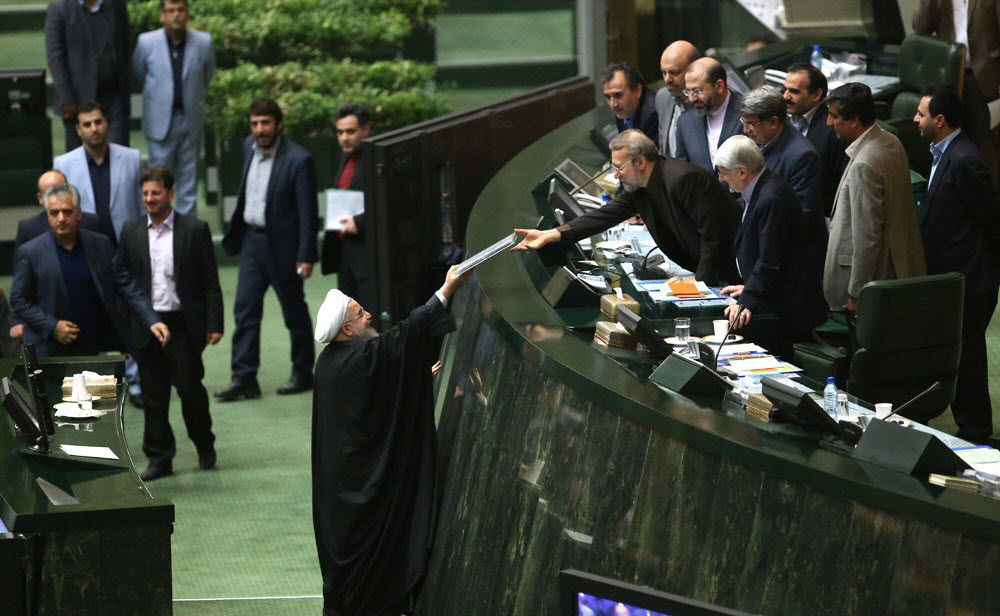 “In next year’s budget, the government intends to increase the wages of employees in tandem with increasing the employment rate for the youth, all the while keeping the prices for gas at the 10,000-rial [10 cents] level and make sure that supervision is made in a way that goods reach people with cheap prices,” reads a report released on December 28th, by an Iranian national broadcaster, that presents the government budget for the next Persian year (March 2019 — March 2020). The problems of the poor will be resolved, minimum wages will rise, the unemployed youth will have jobs, and goods will be less expensive, the report claims.

When we examine what other Iranian outlets and experts working with Iran have to say about the budget bill, we see that it is criticized for a lack of transparency

Iranian economist Vahid Shaqaqi Shahri, told Fararou website, “[Next year’s] budget is not transparent.” The “high budget deficit” is not even presented in the budget bill. According to Shaqaqi Shahri, “In terms of income, the government is going to have more than $10 billion deficit,” — which is a quarter of the whole budget. He highlights a mechanism called “future selling”, which he describes as a new way to conceal the budget deficit. “In the budget, there is a $4.4 billion income through the selling of financial and Islamic bonds… For three years, we’ve introduced the evil phenomenon of future selling of resources in the country.”

Another Iranian economist, and advisor to former presidencial candidate Mir Hossein Moussavi Farshad Momeni, also brings up the lack of transparency in the budget bill. He said, “In financial shortages, the government always moves towards less transparent budgets, and the overlap between the 2019/2020 budget and the political election cycle of the parliament can worsen this situation.”

Mohammad Javad Tavakoli writes that the budget bill fails to describe any solutions to key problems, saying, “As much as you study the president’s and his economic team’s speeches, you won’t find a clue about what plans they have to reform and change these structures. Apparently, you have to wait another five years for them to discover the remedy after they’ve discovered the disease.”

Oil income is the basis of the 2019/2020 budget bill. The budget bill assumes that Iran will export 1.5 million barrels per day for a $54 price per barrel. These estimates are not correct.

The Iranian newspaper affiliated with President Rouhani, Jahan-e Sanat, writes, “A gloomy prospect is estimated for the oil market and in addition to the sanctions which will have an impact on Iran’s oil income, lower oil prices will leave less maneuver room for Iran.”

As well, according to state-run Mehr news agency, “In the budget bill which was sent to the parliament… three weeks ago, the government estimated that next [Iranian] year [That’s from March 2019 to March 2020] it will export 1.5 million barrels [per day] for $54 per barrel. That’s while, because of the oil ministry’s passivity over the last month, Iran’s oil exports have decreased dramatically and are less than one million barrel per day. This shows that the oil ministry couldn’t even efficiently use the waivers that have been given to six countries to buy oil from Iran.”

State-run Javan newspaper reports, “Next [Iranian] year will be one of the harshest budgetary situations for the country. Sanctions have led to a dramatic decrease in Iran’s oil export and since oil income has a key share in the budget, the organization of programming and budget and the government will face challenges and a lack of resources.”

A 20% increase in employees’ and pensioners’ income is promised in next year’s budget bill, but the current inflation rate will increase the cost of living considerably more than 20%.

And while Rouhani claims that more job opportunities will be created for the youth of Iran, the future appeared bleak for the job market even before the second round of U.S. sanctions. In fact, Euronews website wrote in August, “The all-encompassing impact of the first wave of U.S. sanctions on Iran will be an inflation rate above 40 percent and unemployment of one million Iranians.”

The Iranian economy has been weakened, possibly beyond repair, by four decades of economic mismanagement, nepotism, and corruption. As the second round of U.S. sanctions impact the Iranian economy, it continues to espouse propaganda and empty promises.

US tepid to more talks with Iran on Iraq security

Reuters: The United States is uncertain whether to hold...

A Frustrated Attempt to Whitewash Terrorist Mullahs in Iran