AFP: Iran boasted Monday its proven oil reserves have risen by nine percent to 150.31 billion barrels, a week after neighbouring Iraq claimed it had overtaken Tehran in terms of size of crude reserves. 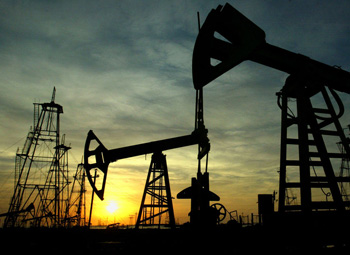 TEHRAN (AFP) — Iran boasted Monday its proven oil reserves have risen by nine percent to 150.31 billion barrels, a week after neighbouring Iraq claimed it had overtaken Tehran in terms of size of crude reserves.

The increased assessment was partly due to new discoveries, Oil Minister Masoud Mirkazemi told a news conference, adding that the figure “will definitely go up” by the end of the Iranian year in March 2011.

“Our calculations are still ongoing. This figure is from a six month report based on production information and new discoveries,” he added.

On October 4, Iraq reported a sharp rise in proven oil reserves that it said had catapulted it into third place worldwide, behind Saudi Arabia and Venezuela.

Iran is the second largest member of the Organisation of Petroleum Exporting Countries (OPEC), behind Saudi Arabia. It also has the world’s second largest natural gas reserves after Russia.

Mirkazemi said Iran has discovered a new gas field, named Sefid with “70 billion cubic metres of gas, 72 percent of which can be exploited,” in Hormozgan province on the Gulf.

Iran is under mounting international pressure over its controversial nuclear programme and Western firms have either pulled out or delayed their commitments in the vital energy sector after new sanctions were imposed on Tehran.

Under threat of US sanctions, European oil firms Total, Shell, Statoil and Eni have pledged to stop investing in Iran, a US official said last month.

“Some of these companies delayed the South Pars blocks for eight years without a cent of investment. They should respond why they delayed for eight years,” Mirkazemi said of Western firms.

“We are not at all worried about investment in oil because there are plenty of resources inside and we have adopted different ways to attract resources,” he insisted.

He also said Inpex, which has a 10 percent stake in Iran’s Azadegan oilfield, “can either stay on or transfer its share to the National Iranian Oil Company.”

The minister acknowledged a drop in annual production of crude but said this was true of all producers.

“All producing countries naturally have some eight percent drop (in oil production) and they need to make investments and restore the wells to keep up.”

“We have to restore (the equivalent of) 300,000 barrels every year which has been done in previous years and it is ongoing,” he said, adding that Iran was continuing to produce in accordance with its OPEC commitments.

The minister said OPEC was unlikely to raise crude output when it meets in Vienna on Thursday.

“Today the supply is in proportion to the demand and there is limited demand because of recession. I do not think any decisions will be made for an output hike in the upcoming OPEC meeting,” he said.

The capital of 46 million Iranians has vanished The stock...

By Jubin Katiraie With the spread of the coronavirus...