Reuters: Striking Iranian merchants have rejected a deal aimed at getting them to reopen their shops in Tehran’s main market and end a standoff with the government, media reported on Wednesday. 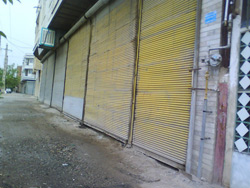 TEHRAN, Sept 7 (Reuters) – Striking Iranian merchants have rejected a deal aimed at getting them to reopen their shops in Tehran’s main market and end a standoff with the government, media reported on Wednesday.

The traders — a conservative and politically powerful group in Iran – went on strike six weeks ago, protesting against the imposition of a new 4-percent value added tax that they said would hurt business.

The unrest in the bazaar comes at a sensitive time for President Mahmoud Ahmadinejad who is pushing through major economic reforms, chief among them the removal of subsidies which have held down the price of food and fuel for years.

Government authorities tried to appease the traders by offering to give them longer to pay the tax, extending a deadline from three to six months, but the merchants rejected the concession, media reported.

“The syndicate has many requests because it faces stagnation in the market and irregular imports which are a real problem,” Abas-Malek Mohammadi, a leader of the textile traders’ organisation told Kaleme website.

“They (the traders) have been put under pressure and it is their right to protest … Some of them had to get a loan to pay their taxes,” he said.

Ahmadinejad’s subsidy reform has contributed to steadily rising inflation which the International Monetary Fund has estimated will average 22.5 percent this year while the economy stagnates.

Iran is also under economic pressure from U.S.-led sanctions over its nuclear programme.

A similar strike one year ago by gold merchants was eventually resolved through negotiation. (Reporting by Ramin Mostafavi; Writing by Robin Pomeroy; Editing by Andrew Heavens)