AFP: Iran is taking advantage of chaos in Syria and Libya to boost efforts to build a nuclear weapon, a western envoy told the UN Security Council on Wednesday. 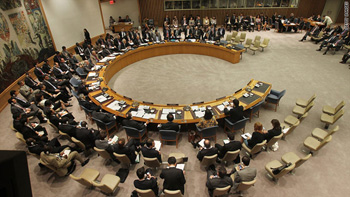 UNITED NATIONS, September 7, 2011 (AFP) – Iran is taking advantage of chaos in Syria and Libya to boost efforts to build a nuclear weapon, a western envoy told the UN Security Council on Wednesday.

With international attention focused on the Middle East uprisings “Iran may believe it can profit from the situation,” France’s UN representative told a Security Council meeting on UN sanctions against Iran.

“It is accelerating its efforts. It has increased the number of centrifuges and provocative statements. But we are not fooled by this,” deputy ambassador Martin Briens told the council, highlighting western demands for the tougher application of sanctions.

France, Britain, Germany and the United States have reported Iran’s firing of a satellite in June to the UN sanctions committee as a potential violation. They say the launcher could also be used to carry missiles.

The Western powers say that Iran’s move in August to transfer centrifuge production to a secretive plant inside a mountain near Qom, south of Tehran, is a new sign that its nuclear program is not peaceful.

The EU nations and United States are seeking to persuade Iran to end its program through negotiations while applying the UN sanctions.

They are calling for tougher application of the current trade, financial and travel ban measures against Iranian officials linked to the nuclear drive however.

“We have made important progress in strengthening our implementation and enforcement of UN sanctions on Iran,” said US ambassador Susan Rice.

“We must redouble our efforts to sharpen the choice for Iran’s leaders to abandon their dangerous course.”

Reuters: Japan is considering a new law to provide...