Iran not to import wheat from India on disease concern

Indiatimes: Iran will not import wheat from India on apprehensions over presence of a fungal disease in the grain. Iran has informed the Indian authorities about their concern over the disease called Karnal bunt and its inability to purchase wheat. Indiatimes.com 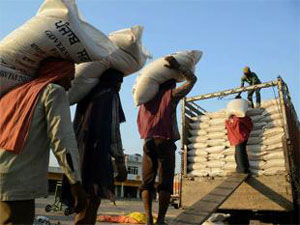 NEW DELHI: Iran will not import wheat from India on apprehensions over presence of a fungal disease in the grain.

Iran has informed the Indian authorities about their concern over the disease called Karnal bunt and its inability to purchase wheat.

“The Iranians are apprehensive about Karnal bunt disease. Although the disease doesn’t affect humans, they say if it spreads on farm fields there, it would create problems,” a senior commerce ministry official told PTI.

India is looking for a global market for its surplus wheat stocks, while Iran, faced with US and EU sanctions, is trying to increase trade with India to overcome those restrictions.

Iran, which buys soyameal from India, hasn’t imported Indian wheat since 1996 due to quality issues. It evinced interest in resuming wheat purchases on a long-term basis due to a drought in Russia.

The official said that Iran had sent a delegation to check the quality of Indian wheat.

India had lifted a ban on wheat exports in September 2011 after record production in two consecutive years. The country is estimated to have produced 93.62 million tonnes of wheat in the 2012-13 crop year (July-June).

The government had allowed the sale of 4.5 million tonnes of wheat from its own stock via public sector trading firms STC, MMTC and PEC, of which over 4 million tonnes have already been shipped.

Reuters: European Union governments have agreed in principle to...

Bush says ‘all options’ on table regarding Iran nuclear program