Italian Leaders and Businesses Cautioned Against Working With Iran Regime 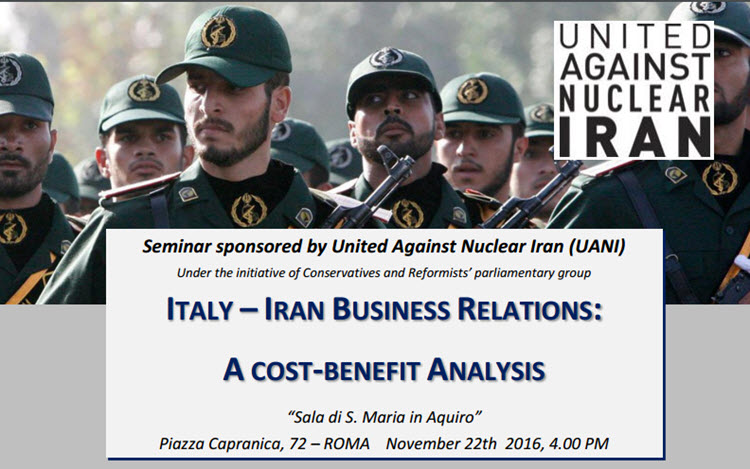 London, 5 Dec – A non-profit dedicated to exposing the evils of the Iranian Regime has cautioned Italian leaders and businesses against working with the Regime as it presents significant financial, legal and reputational risks.

United Against Nuclear Iran (UANI) held a seminar, entitled “Italy-Iran Business Relations: A Cost-Benefit Analysis“, in the Italian Senate at the same time as the “Iran Country Presentation” exhibition in Rome.

They discussed human rights in Iran, Iranian terror funding, the Syrian crisis and the activities of pro-Iranian Shiite militias.

The Iran Country Presentation featured businesses that still have sanctions levied upon them by the United Nations, the European Union and the United States.

This includes Bank Sepah, which “has actively assisted Iran’s pursuit of missiles capable of carrying weapons of mass destruction” according to U.S. Treasury Department officials.

Other companies that are sanctioned include Industrial Development and Renovation Organization of Iran (IDRO); the Iranian Mines & Mining Industries Development & Renovation (IMIDRO); and Khorasan Metallurgy Industry which played a role in developing Iran’s nuclear programme.

Ambassador Terzi said: “It is unacceptable for Italy to welcome sanctioned businesses to an event seeking to increase economic ties between Iran and Italy.”

He continued: “It is illegal for any business-Italian or otherwise-to engage with these sanctioned companies which have been blacklisted by the United Nations, the EU and our ally, the United States. One of the event participants, Khorasan Metallurgy Industry, remains under sanction for its role in developing Iran’s nuclear program. We should not welcome those who have participated in these illegal and illicit activities to our country, and we cannot encourage our businesses to foster ties with these groups.”

The Italian companies that UANI reached out to include Eni, Fiat Chrysler, Leonardo-Finmeccanica, Mediobanca, Banca Popolare di Sondrio, and Danieli.

Reuters: Moscow has not held talks with Iran over...