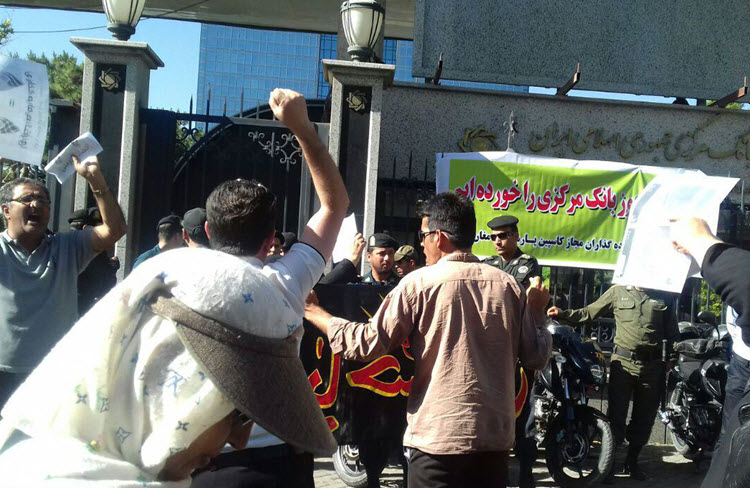 London, 31 May – Baton-wielding police in Iran dispersed dozens of protesters from outside the Iranian Regime’s central bank in Tehran on Monday.

The protesters were demanding that the Caspian Credit Institute, a credit company, return their money to them.

The Caspian Credit Institute, founded in the 1990s, attracted thousands of investors by paying high-interest rates but failed to fulfil its promises.

On April 11, during an interview on state television, Abbas Kamarei, the Ombudsman of the Central Bank, admitted that the Caspian institution is comprised of eight credit cooperative institutions operating illegally.

He said: “Caspian Credit Institution is a corporation of eight illegal cooperative entities and has attracted people’s assets through a variety of deceitful commercials.”

The Shargh Daily, an Iranian paper, reported that the rally was arranged by people who had deposited money into the now defunct government-backed low-interest-rate loan fund, while the Regime-affiliated Tasnim News Agency reported that protesters blocked the Mir Damad Street in Tehran, by staging a sit in.

The protesters chanted “Allah u Akbar” and “death to (Valiullah) Seif”, who is the governor of Iran’s central bank, until the police dispersed them. They also held banners which read: “We trusted the Central Bank”.

According to the Women’s Committee of the National Council of Resistance of Iran (NCRI), the protest was organised by women, a daring move considering the restrictions placed on them by the Regime.

On Sunday, protesters in Khorramabad, the capital of Lorestan province, attacked a branch of Arman Financial with stones and riot police used water cannons to disperse them.

Other protests surrounding the bank failings have been going on for months in Iran, with many people protesting the financial institution’s failure to pay interest or return deposits that are held by the institutions.

Farshad Heydari, deputy head of the Central Bank of the regime, previously claimed they would control the institutions and deal with those who violated their terms.

He said: “The Central Bank of Iran regularly controls the illegal credit institutions and deals with them heavy handedly. “If people deposit their money with an illegal and untrustworthy institution, they will be responsible for any problems that may occur,”

But so far nothing has really changed; many of these are, in fact, unofficial banks which evade restrictions and regulations.

There are hundreds of similar funds are active across Iran but the Regime has failed to regulate them and although two candidates in the recent sham elections had criticised this, there’s no proof that either Ebrahim Raisi or Mohammad Bagher Ghalibaf, would have done anything about it.

Iran blamed for deaths of eight Britons in south Iraq

The Times: Britain has accused Iran of helping to...

Iran court orders teenager to be tied to tree in public