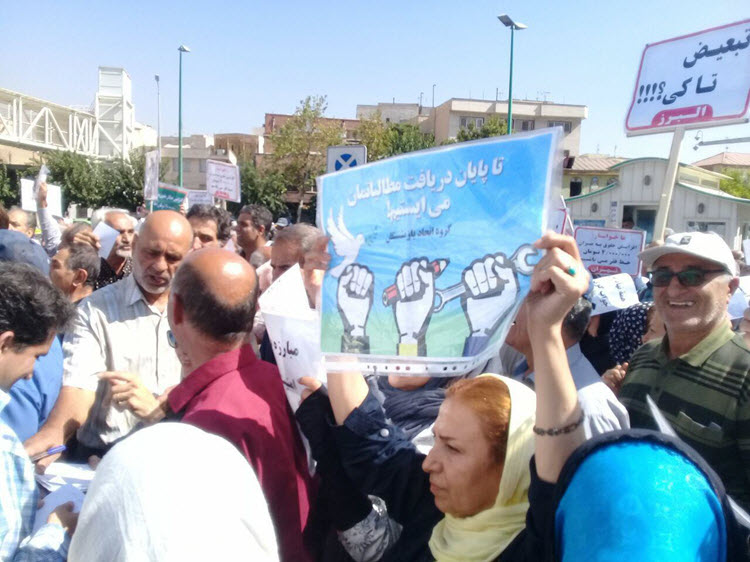 London, 23 Aug – Hundreds of retired teachers and other government pensioners held a rally in front of the Iranian Parliament (Majlis) in Tehran, on Tuesday, August 22, to protest their lack of benefits, according to local media reports.

A spokesperson for the Free Labor Union said: “There were nearly one thousand protesters present at today’s rally in front of the Parliament.”

According to the Iranian Regime-affiliated Labor News Agency, ILNA, a representative for the protesters, said: “Higher pensions and increasing the level of insurance services are our main demands and the authorities should support retirees and pensioners.”

According to Iran’s official state News Agency, IRNA, the protest was organised by military retirees who are upset that the Regime’s Parliament is ignoring a law, which they passed which requires pensions given to veterans to match the salaries of existing service members.

One protester told IRNA: “The law has been passed by the parliament but it has not yet been implemented, while what the pensioners are paid is significantly less than the amount current employees are paid.”

The protesters are demanding that the government set in to ensure the implementation of matching salaries’ act.

In pictures of the rally, which have been widely shared on social media, angry protesters can be seen carrying banners which read “Poverty line, 40 million rials ($1210), Our income, ten million rials (roughly $300)”, “As far as we are under the poverty line, we will not stop demanding”, and “No, to any bargain until we achieve our true rights”.

At noon (local time), protesters ended their two-hour rally but warned that this issue was not done.

Of course, this is far from the first time that pensioners have been protesting bad decisions by the Iranian Regime this year.

The Regime’s suppressive security forces attempted to stop other people from joining the rally, and confiscated the mobile phones of people who were filming or photographing the protest.

Abbas Davari, Chair of the Labor Committee of the National Council of Resistance of Iran ( NCRI ) said: “While the Iranian regime spends billions of dollars of Iranian people’s wealth on its warmongering interventions and export of terrorism to the region and its nuclear and missile programs, the deprived class of the society only reaps poverty, misery, the pillage of their wages, and oppression.”

Iran uses ‘surrogates’ for attacks in Iraq: US commander

AFP: The United States accused Iran Thursday of being...