Iran Further Drops in Happiness and Economic Indices in 2019 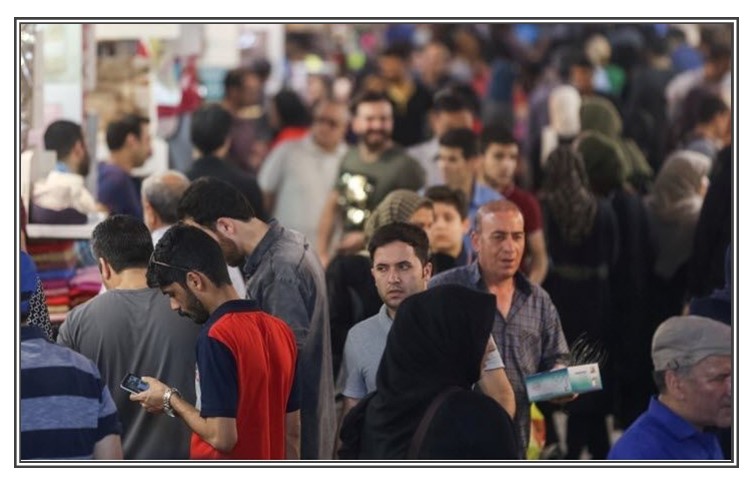 Based on statistics released by international institutes, Iran under the rule of the ayatollahs is classified among the worse countries in the world. In 2019, Iran’s ranks dropped in several indexes in comparison with last year.

In 2012, for the first time, the World Happiness Report as a landmark was published to survey of the state of global happiness. The report is annually ranking 156 countries by how happy their citizens perceive themselves to be. The publisher institution examines various sectors to offer a perfect view, including wealth, life expectancy, corruption, freedom, etc. “This year’s World Happiness Report focuses on happiness and the community: how happiness has evolved over the past dozen years, with a focus on the technologies, social norms, conflicts and government policies that have driven those changes,” the institution indicated its measures on March 29, 2019.

In this respect, on March 21, the institution published its annual report that ranked Finland as the top of the list and Iran as the 117th nation that suffers from lack of happiness, life expectancy, etc. It is worth reminding that Iran was ranked as 105 in 2016. However, it dropped by twelve ranks due to the incompetence of its rulers. 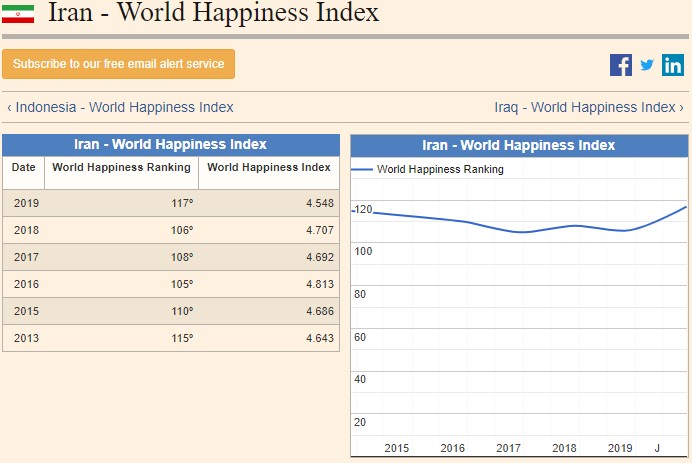 Iran in the List of Top-Ten Modern Slavery Countries

“Walk Free” is a foundation that reports the global slavery index. This foundation believes, “Depriving someone of their freedom is a terrible violation. Modern slavery is a destructive, personal crime and an abuse of human rights. It is a widespread and profitable criminal industry but despite this, it is largely invisible, in part because it disproportionately affects the most marginalized. This is why measuring this problem is so crucial in exposing and ultimately resolving it. The information contained within the Global Slavery Index is critical in these efforts.”

Walk Free classifies the countries according to the following indicators:

1. Breakdowns in rule of law,
2. Displacement and a lack of physical security,
3. The highest prevalence stands out as having state-imposed forced labor,
4. The subject of various UN Security Council resolutions reflecting the severity and extremity of the situations there.

In July, the walk free listed the top-ten worst countries regarding human trafficking stats. “North Korea as the worst offender, followed by Eritrea, Libya, Iran, Equatorial Guinea, and Burundi. The top-ten worst list was rounded out by the Democratic Republic of Congo, Congo, Russia, and Somalia,” Fox News published on July 22.

This organization highlights the direct impact of corruption on the crisis of world democracy. In this respect, TI’s report on the Financial Transparency Index examines 180 countries in the world. Denmark and New Zealand were ranked as the best in the report. Iran was ranked as 138, which shows that it has fallen eight steps compared to the previous year.

TI adjusted the report due to indicators of transparency and corruption in the countries, including the deterioration of democratic institutions as the main reason for corruption; lack of a valid and independent judiciary; percentage of freedom of expression, media, etc.; existence of democratic and civil institutions; and percentage of citizen participation in fighting corruption and making governments transparent.

During 2019, Iran Has Fallen Ten Steps in Economic Competitiveness Index

Recently, the World Economic Forum (WEF) published a report that indexes the situation of economic competitiveness in the international market. The report shows that Iran has fallen ten steps in comparison with the previous year and rested in 99th rank among 141 countries in the world.

In accordance with the annual ranking of the WEF, there is also no good news about the labor market. Iran is ranked 140 among 141 countries in the labor market sector. This ranking was adjusted by:

1. Economic stability in countries
2. Percentage of increase and decrease in the rate of inflation and unemployment in countries
3. Product market acquisition
4. Infrastructure developments
5. The labor markets

In 2019, Iran dramatically lost many indexes of happiness, welfare, well-being, etc. that have made the Iranians one of the more depressed people in the world. Regrettably, the Iranian society failed many measures of a prosperous life in this status quo. However, this cheerless situation would be improved through a fundamental change, the signs of which were exposed during the November protests.

Norway’s Statoil is fined by SEC over Iran affair

Wall Street Journal: The Securities and Exchange Commission and...

By Jubin Katiraie According to the Statistics Center of...