Iran-US Tensions Are a Blow to Iran’s Economy 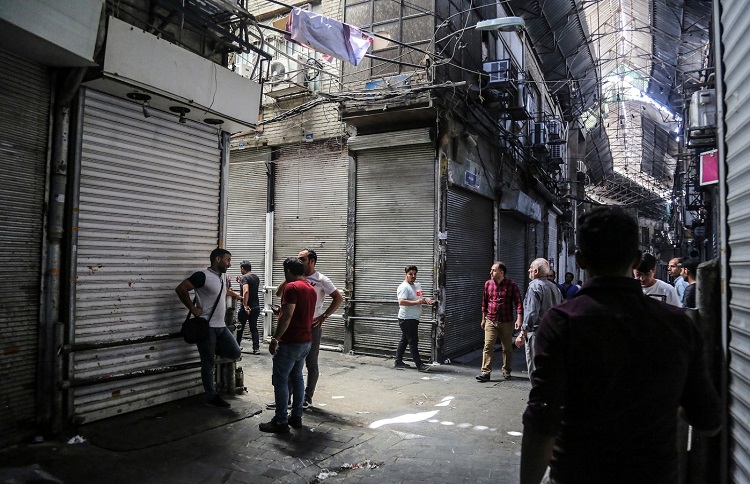 On 8 May 2018, US President Donald Trump officially announced that the United States would withdraw from the 2015 Iran nuclear deal, known as the JCPOA (Joint Comprehensive Plan of Action).

Following this decision, sanctions brought the Iranian economy to widespread instability and uncertainty, and the price of the dollar rose rapidly in the Iranian market until the government was forced to control the currency exchange and the stock market.

One year after the United States left the JCPOA on 8 May 2019, Iran’s Supreme National Security Council issued a statement announcing that it would suspend some of the provisions of the JCPOA commitment.

The regime did not stop at this and Rouhani announced in a statement on 5 January 2020 that he had taken a fifth and final step in reducing Iran’s commitments to the JCPOA. This led to the de facto death of the JCPOA as a result of the return of Iran’s nuclear case to the UN Security Council, making it for the regime much more lamentable than ever before.

The possibility of the lifting sanctions on Iran in the near future would require something of a miracle, and while President Trump is there, there will no lifting of the sanctions for any further negotiations as an answer to Iran’s Foreign Minister Mohamad Javad Zarif.

Iranian Foreign Minister says Iran wants to negotiate with The United States, but wants sanctions removed. @FoxNews @OANN No Thanks!

Take a look at the figures

According to IHS Markit, Iran holds approximately 10% of proven world oil reserves and 15% of global gas reserves. In addition, its access to the Strait of Hormuz brings great geostrategic importance to Iran, but despite these assets, after the US withdrawal from the JCPOA, the GDP growth rate in 2018 was -2.13 percent and in 2019 around -7.66 percent. Inflation reached 21.1 percent in 2018 and 40.6 percent in 2019.

The current escalation of tensions with the US has a negative impact on Iran’s economy and its trade relations and could destabilize the Middle East and global oil markets.

Tensions increased significantly in the summer of 2019 after Iran took down an American drone, and then attacked several tankers in the Persian Gulf and at least the attack on the Saudi Arabian oil refinery ARAMCO.

Then, in a higher orbit, the leader and mastermind of the regime’s terrorist forces in the Middle East, Qassem Suleimani, was killed by an American drone in Baghdad on 3 January 2020. On 5 January 2020, Iran announced its complete withdrawal from the nuclear deal (the JCPOA) as the first retaliation against the attack.

And in the early hours of Wednesday, 8 January 2020, Iran fired missiles at two Iraqi airbases housing US troops. The continuation of this instability is driving Iran’s bankrupted economy rapidly to collapse.

By Pooya Stone The International community has re-launched on...