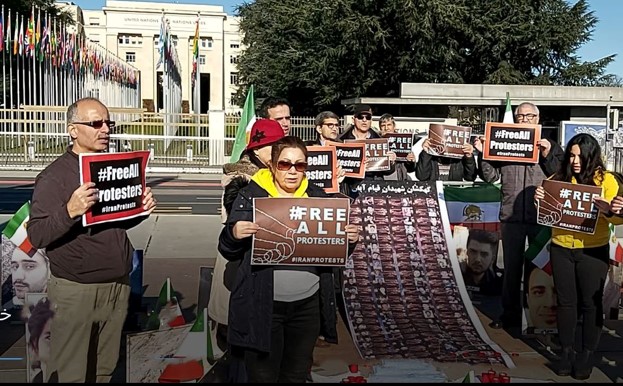 Members of the Iranian diaspora in Switzerland staged a protest in front of the UN European Headquarters in Geneva on Friday, February 7.

Protesters held a photo exhibition in Place des Nations before the UN European headquarters showing faces of those killed during last November’s uprising in more than 190 Iranian cities. According to the Iranian opposition MEK, more than 1500 people were killed in the event. The MEK has to this day announced the names of 724 victims shot by security forces.

Rejecting the current and former regime in power in Iran, protesters chanted: “Neither the turban nor the crown”, “Mullahs and the Shah is the same, both are against Iran’s people.”

Tribute was paid to Resistance members killed on February 8, 1982, by the regime’s security forces. A Flower wreath was poised beside their photos.

The recent arrest of seven political activists in Iran and long prison terms against them by the regime was condemned by the demonstrators. More than 12000 people arrested during November protests remain in prisons, with international bodies in defense of human rights expressing concern on their unclear detention terms as well as an inhuman treatment against them by the regime. Protesters carried placards reading “Free all protesters”.

A symbolic artistic performance was staged during the gathering in support of teachers in prison in Iran. Seven teachers were condemned to 41 years of prison in total last week in Iran on charges of protesting against the poor and inadequate educational content of the country’s schoolbook texts and other related issues.

Nationwide anti-regime protests in November 2019 and January 2020, which shook the regime’s foundations, manifested the people’s desire for a regime change. The ruling theocracy responded by suppression, including the massacre of more than 1,500 and arresting 12,000 protesters. The Iranian economy is in a free fall and continuing protests in Iraq and Lebanon have delivered strategic blows to the mullahs’ belligerence in the region, which was indispensable to their survival for four decades.  The regime’s officials repeatedly warn about the explosive state of affairs and the looming even larger protests. These developments make it palpably clear that Iran is on the verge of major change.

By Jubin Katiraie Amnesty International reported on Wednesday that...
Multimedia