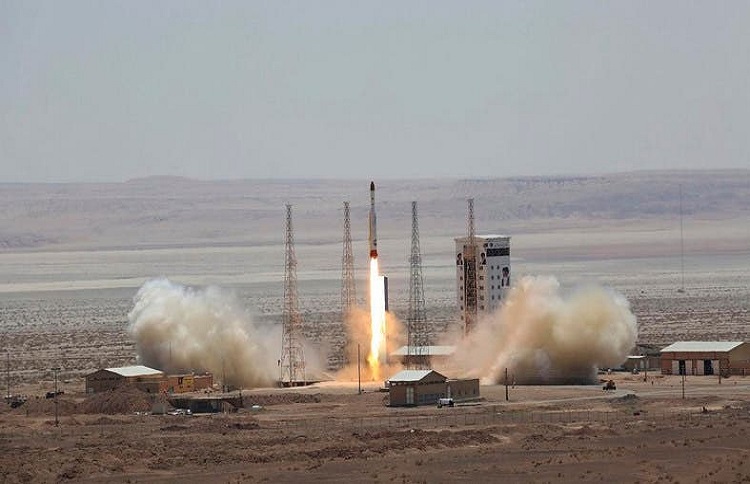 While the majority of Iranians suffer from widespread poverty and they must struggle hard to make ends meet, the Iranian government delivered another failed adventurous project. On February 9, the government tried to launch a communications satellite into space.

However, it failed once again and wiped millions of dollars’ worth of national wealth, while the country is grappling with the toughest economic conditions according to officials’ remarks.

The propaganda apparatus also concealed this matter and claimed that “the launchpad has successfully launched the Zafar satellite. However, the satellite didn’t achieve the necessary speed to reach orbit [and burned].” This test, of course, wasn’t the first satellite launch by the Iranian government.

On August 30, while Iranian officials downplayed their failure launch, U.S. President Donald Trump exposed the truth by showing a satellite image from a damaged launch pad in Semnan, northeastern Iran.

The United States of America was not involved in the catastrophic accident during the final launch preparations for the Safir SLV Launch at Semnan Launch Site One in Iran. I wish Iran best wishes and good luck in determining what happened at Site One. pic.twitter.com/z0iDj2L0Y3

The Iranian government is known for its export of terrorism and fueling ethnic conflicts in the Middle East. The ayatollahs genuinely see all scientific progress as a route to improve their adventurous foreign policies or employ tougher oppressive measures on their own people. Therefore, launching a satellite is merely a cover for their ballistic missile programs that threatens peace and security in the region.

Additionally, all these failures are taking place while most people are living under the poverty line. According to remarks by the former Mayor of Tehran Mohammad Bagher Ghalibaf during an election debate in April 2017, around 94 percent of the ordinary people live under the poverty line, which shows that the ayatollahs represent 4 percent of the population by the most optimistic assessment.

Notably, in late December 2017 and November 2019, economic grievances initially triggered protests, which rapidly extended across the country and turned into political uprisings against the ruling system in its entirety.

“Reformists, principlists, the game is over,” was chanted in the both mentioned protests, which shows the people have been persuaded the current regime cannot resolve their problems.

Also, in January 2020, the people directly targeted the highest official of the government, Ali Khamenei, as the supreme leader and called for his resignation. They also bluntly announced that the Revolutionary Guards (IRGC) is the main obstacle for the country.

Earlier, the Iranian people rejected the regime’s meddling in the Middle East, chanting, “Neither Gaza nor Lebanon, my life is only for Iran,” and “Let go out of Syria, think about us.”

They have previously condemned the widespread corruption and embezzlement as the real reason for dire conditions of the country’s economy. “Our [economic] problems will resolve if there’s one less [government] embezzlement case,” they chanted, proving that the people recognize the government mismanagement and corruption as being more dangerous than international sanctions.

In these circumstances, the government’s adventurous policies whether in nuclear bomb-making projects or ballistic missile programs only impose more pressure and isolation on the country.

While the mullahs lost their legitimacy by killing more than 1,500 innocent protesters, they are scrambling to style their regime as a regional power and stable state to terrify the Iranian people.

Iranian officials, including the supreme leader, the president, the head of the Judiciary, and others frequently announced that if they stop their involvement in foreign conflicts, they must face their enemy in Tehran.

Their admissions display that their archenemy is not a foreign country. “Our enemy is here, [the mullahs] are lying about the U.S.,” is a familiar slogan among the Iranian people that shows both the people and officials recognize the real battle runs between the nation and the whole state.