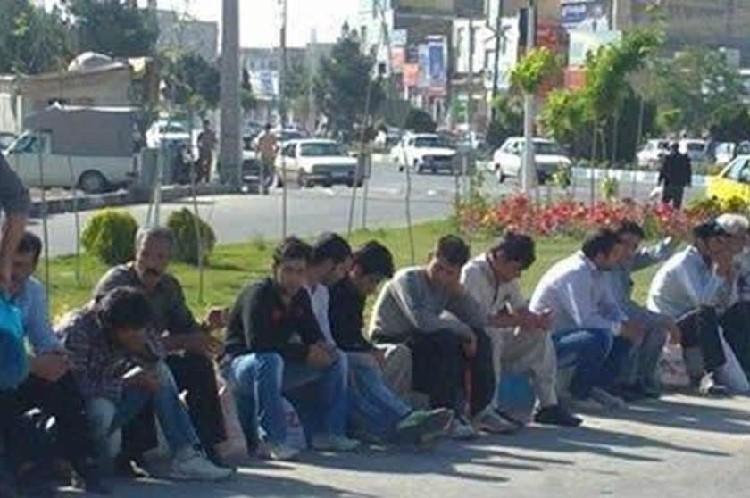 On April 28, Iran’s Deputy Minister of Cooperative, Labor, and Social Welfare Hojjatollah Mirzaei admitted that given the novel coronavirus outbreak, around 4.8 million of the workforce are at risk of losing their business. Also, around 20 percent of the country’s entire businesses have been affected by the COVID-19 disease.

Recently, the state media reported only 600,000 official workers have become unemployed in three weeks. On April 14, Sharq daily wrote, “In Tehran province, around 87,000 workers lost their jobs and the average in other provinces is more than 10,000 people.” Notably, the fate of many of them is unclear due to the deficit of insurance funds in covering unemployment insurance.

However, Sharq’s stats only include official workers, not unofficial, daily, and child workers who enjoy no support and have to struggle hard to make ends meet. On the other hand, the population of Iran’s labor community is estimated to be over 14 million people. A back-of-the-envelope calculation shows that workers and their families consist at least 60 million of Iran’s 80-million population.

Dismissing of 4.8 million breadwinners is synonymous with cutting off revenues of 4.8 million families and leaving them in hunger. The government tried to compensate coronavirus’ economic consequences for a $62-loan with 12-percent interest, which prompted the public ire against the entire governing system.

In fact, not only ordinary citizens but also the government’s advocates suggested that supreme leader Ali Khamenei allocates a part of his legendary wealth to the impoverished segments of the society. “Four financial institutions, including the Execution of Imam Khomeini’s Order (EIKO), Astan-e Quds Razavi, Khatam al-Anbiya Constructional Headquarters, and Mostazafan Foundation, control at least 60 percent of Iran’s economy, according to “reformist” politician Behzad Nabavi.

Remarkably, all the mentioned institutions are under the thumb of Khamenei or his appointees and the Revolutionary Guards (IRGC). Furthermore, several sources estimate the supreme leader’s properties to be more than $300 billion. However, he prefers to waste this huge asset on adventurous policies and funding his regional allies and proxies instead of boosting needy people in Iran to pass the coronavirus era.

Additionally, according to Mirzaei, the administration has a $12.5 billion debt to the Social Security Organization. Also, the government is unable to pay official employees and even medical staff who are on the frontlines of the struggle against the coronavirus.

On the other hand, Brent crude prices have dropped to under $23 per barrel, a record low since 2003. Now, economic experts speculate that Iran may be unable to sell crude for $15 per barrel. However, thanks to the ayatollahs’ costly irresponsible policies, the country cannot sell enough crude and all these figures are on paper alone.

Last year, head of the Planning and Budget Organization Mohammad Bagher Nobakht announced that the government has closed the 2020-2021 budget bills with $50pb revenues. However, with respect to the unprecedented drop in oil prices, the country will face a severe budget deficit.

However, officials avoid spending their stellar wealth on reviving the country. Instead, the ayatollahs initiated to pay the cost of their bankruptcy at the expense of ordinary people. In this respect, the Organization of Grain and Commercial Services has raised the bread prices by 50 percent under the excuse of “organizing prices.”

In reality, the government is playing with fire, and the move will possibly lead the society to another round of social protests like last November. However, the ayatollahs are more unlikely to rescue their oppressive rule from public wrath, particularly given their disastrous record in the coronavirus era.

AFP: The UN Security Council met Monday on how...

Bloomberg: The Obama administration and arms control specialists in...