Iran’s Authorities Are Destroying Its Agriculture 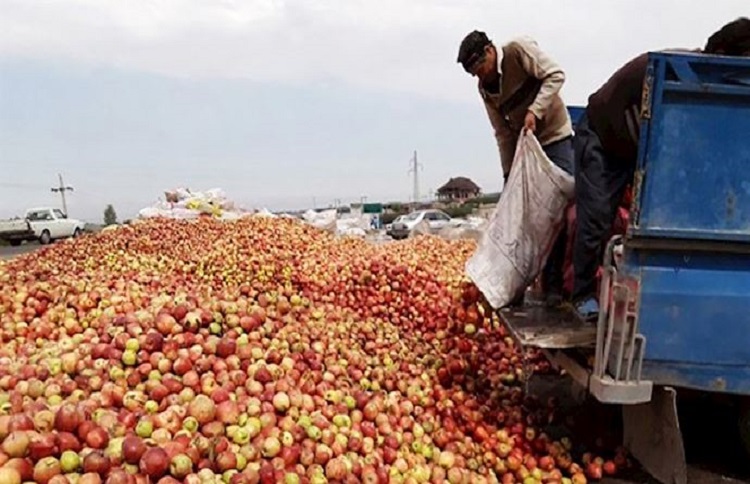 Recently, many videos have been posted on social media showing deprived farmers destroying their crops with their own hands or being forced to sell them at a low price but did not accept to give it to the government.

The question is, why do farmers destroy their crops or reluctantly sell them at a low price?

The destruction of agricultural products by farmers is happening while President Hassan Rouhani said on 16 May: ‘We need rials, we need goods, we need services. If our eyes are on exporters, we will not have problems, provided that, they export and bring back the dollar.’

While Rouhani speaks of exports, the domestic production of artisans and farmers is destroyed by imported goods, especially tariff-free imports, in which state-run institutions and government officials are involved.

Import and export of agricultural products

What remains for export, and Rouhani is looking forward to, is the export of food and agricultural products, which are already missing from the table of most Iranian families.

Last year, people in the border areas of Iran’s Kurdistan blocked a convoy of hundreds of trucks carrying potatoes to Iraq, as potatoes were becoming scarce and expensive inside the country at the same time.

But the authorities, which are thinking of earning money and foreign exchange to finance government spending, are preventing the people from getting the country’s goods and exporting it to other countries. While the government exports food abroad, it also imports these items from abroad at the same time.

This is done by government-affiliated mafia gangs that smuggle and import goods without paying customs duties. The report of the Committee of Inquiry of parliament states that the import of goods in 2015 and 2016 was worth more than 25 billion dollars.

Certainly, this amount of imports has destroyed domestic products and caused the price of domestic products to fall. After the prices of domestic products fall compared to foreign products, mafia bands, which are mainly affiliated with the Revolutionary Guards (IRGC), purchase the agricultural products produced by the farmers at a very low price and less than the production price from farmers. They buy it and export it to other countries at several times the price, pocketing a lot of money from it.

Examples of unregulated imports that destroyed the efforts of Iran’s farmers are as follows:

Imports of livestock from Brazil in June 2020, at a time when dairy products are being purchased from Yazd farmers at a very low price.

‘Importing meat from Brazil is tantamount to rebuilding Brazilian livestock and bankruptcy and destroying Iranian ranchers,’ the farmers wrote on their placards.

This situation is also related to the import of tea, Fars News Agency wrote on 4 May: “In the last few years, the import of agricultural products, especially tea, has destroyed the farmers and domestic production, and sometimes the same Iranian tea has entered the country with foreign packaging and brands and has been placed on people’s tables.

While their quality never reached the Iranian tea, and it was the brokers who always benefited from the presence of farmers and their products, and the law has so far failed to properly prevent intermediaries to harm the farmers.”

After the blows that farmers face due to the uncontrolled import of agricultural products, the next blow that will befall them is not buying their products by the relevant government agencies. Many farmers’ problems are the lack of guarantees for the sale of their products and the presence of brokers in the market.

The brokers are looting the production of the farmers, many of whom are brokers of the ‘Agri-Jahad’ (the state’s organization for capturing Iran’s agriculture system) had and those affiliated with the government and the Revolutionary Guards.

IRNA wrote in a report from Jiroft on 28 April: “Imagine a simple farmer who harvests only a ton of tomatoes and waits from morning to afternoon to get his crop to the market so that he can sell his crop at a good price, unaware that brokers have already colluded and are not willing to pay even one rial more than 500 tomans for each kilogram of tomatoes.

“The weather in the south of Kerman is so hot that the quality of tomatoes decreases with each passing hour, and consequently the price decreases. In the end, the tomato farmer of Jiroft is forced to give all his product to the broker for 400 to 500 thousand Tomans, while he has spent 750 thousand Tomans to buy the basket, box and carry this product.”

This situation is not unique to tomatoes, and in fact, all agricultural products in the Kerman region have this situation.

A farmer also said that onions cost 400 tomans and onions does not worth it. Regarding the presence of the IRGC in the bazaar, a government official said, ‘IRGC friends were also present today for agreed purchase.’

The same situation exists for wheat farmers in Urmia. The Hamshahri website published the words of one of the farmers on 14 April. It wrote: ‘Although farmers make every effort, the profits go to brokers and intermediaries, leaving virtually nothing for the farmer.’

IRNA wrote in a report from Sabzevar: ‘Annually, 240,000 tons of various agricultural products are produced in Sabzevar. Brokerage and intermediation in the agricultural sector of Sabzevar city have expanded due to price fluctuations and lack of sufficient supervision.

‘So that brokers buy agricultural products at a low price and make a lot of money by offering them to the market at the right time without any effort.’ (IRNA, 4 January 2020)

The government mafia has a hand in fertilizers and agricultural chemicals

According to this the state-run daily Eghtesad 24: ‘The mafia of fertilizer and agricultural chemicals have busted the Iranian farmer. For various reasons, Iranian food products cannot enter the global market. The gardens of the country have not been improved, and the sowing of our seeds is not right, and worst of all, the fertilizers and poisons used in the agricultural sector of Iran have been abandoned in the world for many years.

The authorities pursued this inhuman policy by cutting off farmers’ water or selling them water at exorbitant prices. So that the farmer must either be enslaved by the IRGC or leave agriculture and go to the outskirts of cities and struggle with more poverty.

List of Challenges That Shattered the Iranian Economy in 2019