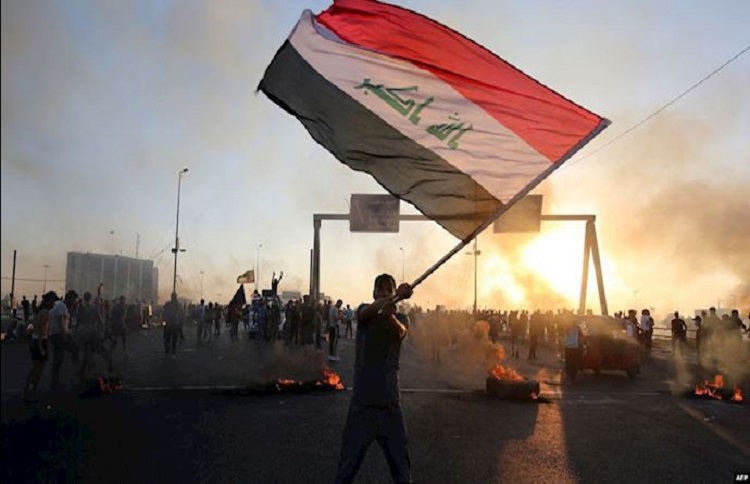 Iran-backed security forces opened fire on protesters in Najaf and Babil, southern Iraq, with gunfire continuing into the night, as well as using tear gas to disperse the crowd.

The demonstrators were protesting against poverty, economic corruption, and meddling in Iraq by the Iranian government through proxy groups and corrupt politicians.  They chanted slogans against former ministers as they protested and even succeeded in blocking the Diywania-al Hamza highway in Najaf.

In Nasiriyah, protesters called for corrupt rulers, proxy groups, and those in power with ties to Iran to be overthrown, while in Babylon and Basra, demonstrators gathered outside a police station and forced officers to release wrongfully arrested protesters.

The Iraq October Revolution Demonstration Committee released a statement on the recent attack on demonstrators in Babylon by oppressive government forces, which involved running over protesters with military vehicles, calling it a “cowardly terrorist attack”. The Committee praised the brave youth for defeating the proxy forces’ attempt to crack down on the protest.

Back on June 3, Iranian Revolutionary Guards (IRGC) Quds Force chief Esmail Ghaani traveled to Iraq, which we now because he had to obtain a visa; something that never happened in previous years because Iranian officials had more or less free rein in Iraq.

Brigadier general Sa’dollah Zarei wrote that this development is an indication of the US military agenda in Iraq. In the piece he wrote for Kayhan newspaper, widely considered the mouthpiece of Supreme Leader Ali Khamenei, Zarei also revealed his fears over Mustafa al-Kadhimi being appointed Iraq’s Prime Minister. He said that the invitation to NATO Secretary-General Jens Stoltenberg for a visit to the country and the announcement of new talks with the US were concerning for Tehran’s future interests in Baghdad.

In February, the People’s Mojahedin Organization of Iran (PMOI/MEK) and the National Council of Resistance of Iran (NCRI) discovered and published documents showing that 32,000 Iraqis, mainly politicians and senior paramilitary commanders, were on the payroll of the Iranian government.

Reporting on this, Al-Hurra TV said that those listed who hold great influence in government bodies, “claim to be Iraqis but are closely tied to Iran” and that this shows “the occupation of Iraq by the mullahs’ regime”.

Iran-backed militias have killed hundreds of protesters in the streets and abducted/murdered in their homes many others, since protests began in October 2019.

Iran tries to split UN as it rejects nuclear demands

The Guardian: After months of defiant rhetoric over its...

Festival in Iran turns into protest