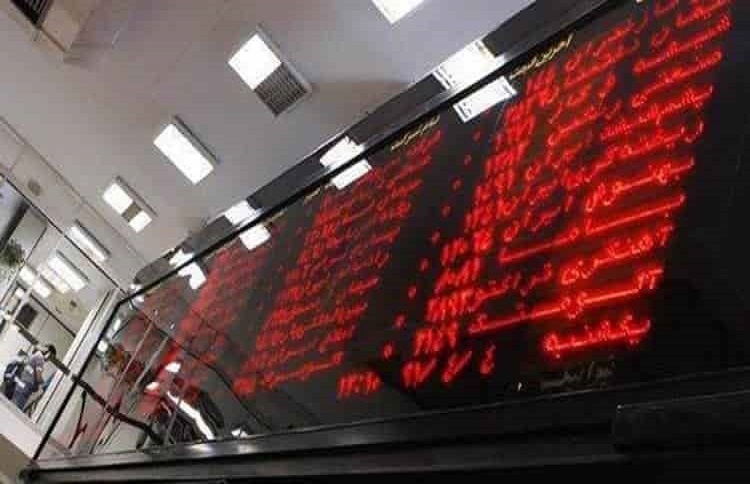 With the unprecedented fall of the stock market, Iran’s economy is facing a new economic turbulent. The Iranian stock market on 16 August, with a fall of 89,000 units, broke the record of reducing the capital market index.

The state-run website Gostaresh on 17 August wrote: “After a dark and unforgettable Sunday, can Monday be a day for the stock market to return to happy days?

“Stock market analysts today have high hopes for the support of 1.8 million units. Yesterday, the market closed in one million and 813 thousand units. The high hopes about the support of this super range can have two effects: First of all, it can increase demand at this level, because some traders and market participants think that the index has improved enough and the stock price has reached a level that is worth buying, so it can cause heavy support in this range; The bad news is that if the negative slope of the market continues like the past two days and the channel of 1.8 million units is lost, a lot of hope will probably be lost and the creation of a negative atmosphere could lead to a further drop in stocks.” (Gostaresh, 17 August)

The opinions of Iran’s economists

Iran’s economists believe that much of the decline was due to falling off the ‘Shasta’ stock price. This means that the fall in the price of this symbol alone caused a decrease of about 22,000 units in the total index. In addition to the total stock index that has fallen, the OTC index also fell 568 points today. So that the value of transactions in the stock market until yesterday, was more than 9 trillion tomans and in the OTC market was more than 5 trillion tomans.

Jalal Rouhi, one of the government’s economists about the fall of the stock market, referring to the growth of symbols that are to be offered in the second and third Dara funds, said: “With the cancellation of the supply of these two ETF funds and the inconsistency of the two ministries of economy and oil, we saw a decline in the market. This is while the supply of the second and third Dara funds has been approved by the Cabinet and is binding.”

“Eventually, Dara Fund was supposed to be offered on the second of September, but because the stock market is inherently risky and also the inconsistency of the public offering caused a loss of public confidence, and on the other hand, the market needed an excuse to correct prices, this event (cancellation of Dara II supply) caused the market to collapse.”

The capital market expert, emphasizing that the recent declines caused the market to be a little out of balance, pointed to the issue of reducing the value of brokerage credit from 15 to 10 percent and said: “The stock exchange organization should not reduce the value of the brokerage credit when we needed to enter liquidity, because investors were less able to use their credit for non-cash purchases.”

Rouhi considered the issue of issuing oil futures as another reason for the recent stock market losses and said: “Although it was announced today that the supply of these bonds has been stopped for now, the publication of news about the supply of futures was effective in the market decline; In general, these factors went hand in hand to reform the market.” (Raja news, 17 August)

Ali Gholhaki, one of Iran’s economists, in a sarcastic tweet, pointed out the consequences of the government’s play with the stock exchange and warned about an uprising in September 2020: “The stock market has collapsed. The September riot needs a reason!

“Much sooner than we thought, government management of the stock market is becoming a national security issue! Manipulation of people’s capital in the “capital market” for whatever reason does not include the good of the people and is more like a lever of pressure on the government. The “September Uprising” requires a reason; The sympathizers of the country should be more careful!” 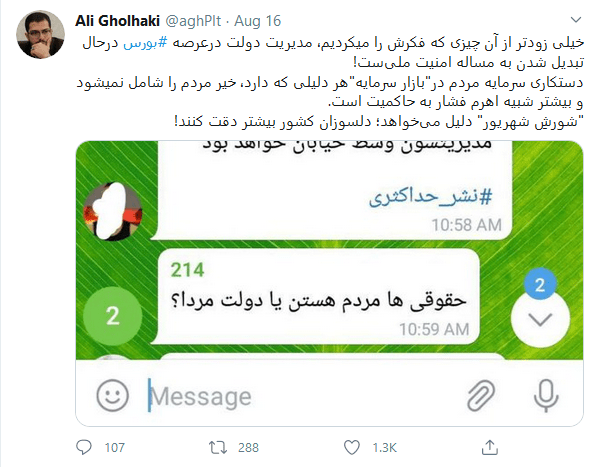 The state-run daily Ebtekar, Referring to the failure of the Rouhani government’s tricks to attract people’s money under the title of buying shares of state-owned companies in the stock market, wrote: “The government saw the fate of the wrong behavior in squeezing the gasoline spring in November 2019, and now that many springs are squeezed, any behavior that leads to the formation of a stock bomb and its ignition will create a mass suicide for the economy and society and consequently security.”

And Aftab Yazd daily wrote: “If people lose confidence in the market, the effects will not be the same as before. Maybe because this time the masses of people are involved in the stock market, the stock market collapse cannot have good consequences.”

Nasser Mousavi Largani Member of the Presidium of the parliament tweeted: “What is happening in the stock market is not normal … It is not possible to lure small shareholders, who are mostly ordinary people, to the stock exchange and pulverize up to 30% of their capital.”

Eni says its Iran activities could lead to U.S. sanctions