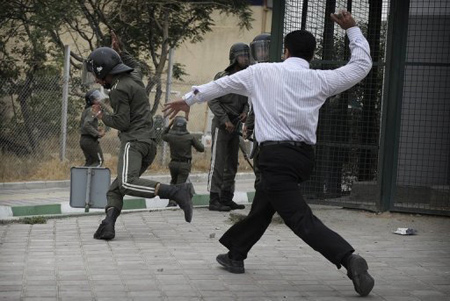 “Ninety-one suspects have been arrested by the police and their cases have been forwarded to the judiciary,” Sajadinia was quoted as saying by the ISNA news agency.

Tehran province governor-general Morteza Tamaddon was quoted by the Fars news agency as saying that a number of “munafeqeen” (hypocrites — the term the regime uses to describe the outlawed rebel People’s Mujahedeen) were arrested.

“Based on the information received, among the people arrested… there were a number of munafeqeen. The security and police authorities will give more details in due course,” Tamaddon said without elaborating.

The anniversary passed without any major anti-government protests, although some opposition websites and news agencies reported some skirmishes at Tehran’s Sharif university between pro-regime hardliners and anti-regime students.

Last year on June 12, President Mahmoud Ahmadinejad was returned to power in an election that the opposition charged was massively rigged.

In the immediate aftermath of the poll, Tehran was rocked by massive street protests and clashes in which dozens of people were killed.

Street protests have subsided in recent months, but opposition leaders have vowed to continue their struggle against the hardline president.

Is the U.S. kowtowing to Iran in nuclear talks?

Washington Post: The most interesting public result of the...

Reuters: Oil and container trade between India and Iran...