Reuters: Iran, backed by Muslim and other allies, tried Tuesday to quash a Western-led move at the U.N. Human Rights Council to rebuke Tehran’s post-election crackdown.

Norway and the United States have spearheaded a bid at the Geneva forum to chastise Iran for its violent suppression of demonstrations, including arrests and executions of dissidents, following presidential elections a year ago.

Some 55 states from across all regions — half of them European Union (EU) members — have endorsed the statement, which calls on Iran to uphold fundamental freedoms of expression, of the media and of assembly, diplomats say.

As Norway’s ambassador Bente Angell-Hansen began to read out the text, Iran’s ambassador Hamid Baeidi Nejad interrupted, invoking procedural grounds to object to being singled out.

Pakistan, speaking for the Organisation of the Islamic Conference (OIC), as well as African and non-aligned countries, swiftly backed Iran. The objection was to Iran’s record, a “country-specific situation,” being addressed under an agenda item on a landmark human rights meeting held in Vienna in 1993.

“Allowing this to happen … is leading to a repeat of the practice of the Human Rights Commission where ‘naming and shaming’ was the name of the game and led eventually to the demise of the Commission,” Pakistan’s envoy Zamir Akram said, referring to the Council’s largely discredited predecessor body.

Belgium’s ambassador Alex Van Meeuwen, who currently chairs the forum, said that as long as a text addressed a relevant human rights situation it was admissible. He adjourned the session for several hours to allow private negotiations.

The United States and Norway have heavily lobbied countries to endorse the statement, according to diplomats and activists.

“We cannot let this Human Rights Council session go by without marking the one year anniversary of these events this month,” reads the statement.

The 2009 post-election street protests, the worst unrest since the Islamic republic was founded in 1979, were put down violently by the Revolutionary Guards. Mass detentions followed. Two people were hanged and scores of detainees remain in jail.

The statement would add to pressure after extended sanctions agreed by the U.N. Security Council last week to punish Iran for what Western countries say is a nuclear weapons program.

It voices concern at “events including the violent suppression of dissent, detention and executions without due process of law, severe discrimination against women and minorities including people of the Baha’i faith and restrictions on freedom of expression and religion.”

The Human Rights Council, dominated by developing nations wary of interference in their own affairs, rarely “names and shames” states. The main exception is Israel, regularly condemned for alleged abuses in its occupied territories. 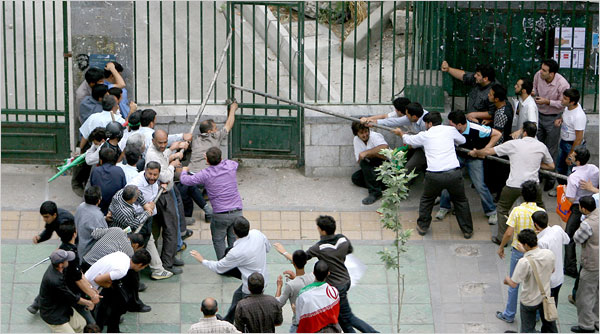