New York Times: Iran’s conservative establishment appears to have reacted coldly to an entreaty by Brazil’s president to allow an Iranian woman convicted of adultery to take asylum in Brazil rather than face execution by stoning at home. 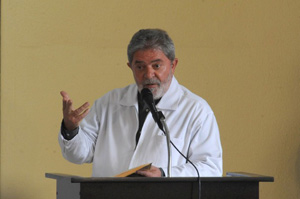 WASHINGTON — Iran’s conservative establishment appears to have reacted coldly to an entreaty by Brazil’s president to allow an Iranian woman convicted of adultery to take asylum in Brazil rather than face execution by stoning at home.

The reaction to the plea over the weekend by President Luiz Inácio Lula da Silva may introduce a strain into what has been an increasingly cordial relationship between Iran and Brazil. It also reinforced what critics of Iran view as a barbaric form of justice that is especially repressive toward women.

While no Iranian government officials commented on the Brazilian president’s plea, Jahan News, an ultraconservative news service in Iran that is regarded as credibly reflecting the government’s thinking, said Sunday that it was a “clear interference in Iran’s domestic affairs.”

Jahan also said that the Brazilian offer was made “under the influence of foreign media” and that the defendant, Sakineh Ashtiani, 43, might not be stoned to death because Iran’s judiciary was reviewing the lower court’s sentence. She could be hanged instead.

Ms. Ashtiani, 43, was convicted of an “illicit relationship” with two men. She denied the accusations during her trial.

Her case has attracted widespread attention on Iran’s record on human rights. The country is among the leading purveyors of capital punishment, and its strict Islamic laws make adultery a capital crime.

Mr. da Silva had initially rejected requests from rights advocates to use his influence with Iran to dissuade the authorities from executing Ms. Ashtiani, but he evidently had a change of heart during the weekend while he was campaigning in Brazil with for his former chief of staff, Dilma Rousseff. He has chosen Ms. Rousseff as his successor in the next presidential elections.

“If my friendship and affection for the president of Iran matters, and if this woman is causing problems there, we will welcome her here in Brazil,” Mr. da Silva said.

Meanwhile, the lawyer representing Ms. Ashtiani, Mohammad Mostafaei, appears to be in hiding after the arrest of his wife and brother-in-law.

According to Mr. Mostafaei’s own account, published on Saturday by the Iran Human Rights Activists News Agency, police officers questioned him at his office on July 24, then returned with a warrant for his arrest.

Finding him absent, the officers went to his home, where they arrested his wife and brother-in-law without giving a reason, Mr. Mostafaei wrote.

In his letter, Mr. Mostafaei appealed to Tehran’s chief prosecutor, Abbas Jafara-Dolatabadi, calling the detention of his family members “hostage taking” and an “abuse of power.”

Debate on Iran in the UK House of Commons  Part 1

Iran steps up executions even as European officials visit