Wall Street Journal: A prominent Iranian human-rights lawyer, Mohamad Mostafaei, has fled to Turkey and applied for asylum after Iranian authorities issued a warrant last week for his arrest and detained his wife and brother-in-law. 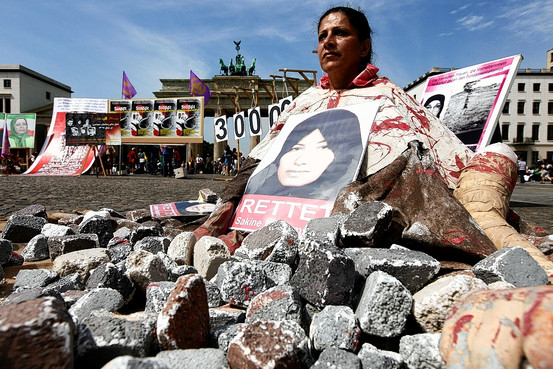 A prominent Iranian human-rights lawyer, Mohamad Mostafaei, has fled to Turkey and applied for asylum after Iranian authorities issued a warrant last week for his arrest and detained his wife and brother-in-law.

Mr. Mostafaei, reached by phone at a Turkish detention center on Thursday, says he hasn’t been formally charged in Iran, and left because of what he describes as a “flawed judiciary that does not abide by any laws.”

Mr. Mostafaei said he has filed an official request with the United Nations refugee agency and has had offers from several countries, including Canada and Norway, for resettlement. Turkey only accepts refugees from European countries.

“I love my country. I loved helping people and I didn’t escape because I’m afraid of going to jail. I did it because I have no more belief or respect for Iran’s judiciary,” Mr. Mostafaei said.

Mr. Mostafaei, 35 years old, drew scrutiny from Iranian officials after using his legal blog and connections abroad to gain international attention for a recent client, a woman convicted on charges of adultery and sentenced to death by stoning.

An online petition for Ms. Ashtiani’s release had more than half a million signatures as of Thursday, with celebrities such as Gwyneth Paltrow and Peter Gabriel joining the effort. Last week, protesters around the world staged demonstrations calling on Iran to release her. The organized international pressure appears to be yielding results, human-rights groups say.

“Her case is still being processed and nothing is yet decided,” Mossadegh Kahnemoui, a senior Iranian judicial official, told the United Nations Committee on the Elimination of Racial Discrimination in Geneva on Thursday. Iran’s judiciary also said this week that Ms. Ashtiani is guilty of murdering her husband, according to Iranian government media. The punishment for that charge is death by hanging.

Iran’s reaction to the criticism surrounding its handling of the case has been two-pronged, analysts say. It has tried to save face internationally by delaying Ms. Ashtiani’s execution, while cracking down on the lawyer responsible for drawing international attention to her sentence.

“Going after Mostafaei is an overall attack on the legal community in Iran to intimidate them into silence,” says Hadi Ghaemi, the New York-based director of International Campaign for Human Rights in Iran.

Mr. Mostafaei has a long history of taking on politically sensitive cases pro bono. He has pressed Iran’s judiciary to ban stoning, juvenile executions and the imprisonment of political dissidents. He has represented 40 juveniles on death row, he says. Eighteen of those clients have been freed, while four have been executed; the remaining 18 cases are pending.

Mr. Mostafaei has been briefly detained twice in the past year, but his work was largely tolerated by the Iranian government until last week. In an open letter to the head of Iran’s judiciary, dated July 31, Mr. Mostafaei said he was called in to the Evin prison for a three-hour interrogation July 24, and then told he was free to leave.

When he returned to his law office that day, he said, it had been ransacked, and his assistants told him intelligence agents had a warrant for his arrest. Mr. Mostafaei says agents surrounded his office, and when his wife and brother-in-law came to pick up his car, they were arrested. He was outraged, he says, by what he calls ‘the government’s hostage taking” of his family, decided not to turn himself in, and went into hiding.

His brother-in-law has been released, Mr. Mostafaei says, but his wife is still in solitary confinement in Evin prison. Their 7-year-old daughter is staying with her grandparents, he says, and thinks her parents are away on a trip.

US looking for more ways to pressure Iran-Geithner

Flash flood in Iran have taken 11 victims till now