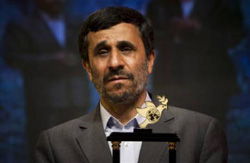 “In the near future we will be sending a communications probe into space whose lifespan will be one year,” the semi-official Mehr news agency quoted him as saying in a live conversation on state television in the western city of Hamadan.

“The government has undertaken plans so that we would be sending a manned spacecraft into space in seven years.”

Western countries suspect Iran is trying to build nuclear bombs and are concerned the long-range ballistic technology used to put satellites into orbit could be used to launch warheads.

Iran, the world’s fifth-largest oil exporter, has always insisted its nuclear programme is for generating electricity.

In 2009, Iran launched a domestically-made satellite and put it into orbit for the first time. It said the Omid satellite was launched for peaceful telecommunications and research purposes.

AP: Iran has summoned a Saudi envoy to protest...

Iran: No US troops will leave the region alive if Iran attacked