Obama’s briefing on Iran: It’s about pressure, not diplomacy

Washington Post: The White House called in a small group of journalists this week to listen to President Obama and his top advisers give a briefing on the state of the sanctions regime against Iran. 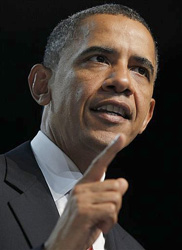 The White House called in a small group of journalists this week to listen to President Obama and his top advisers give a briefing on the state of the sanctions regime against Iran. Others at the meeting have described it as “unusual,” but I don’t know why. Its purpose couldn’t have been clearer: The president and his team wanted to take some credit for all the difficult months of diplomacy that led to the passage of the U.N. sanctions resolution in June, especially the persistent cajoling of Russia and China. They also wanted to show just how tough the new sanctions are, especially with the European Union piling on in unprecedented fashion after the resolution passed. Without making any absurd predictions about the likelihood that the regime would now be persuaded to give up its quest for a nuclear bomb, they argued that the new sanctions would at least cause the regime significant pain.

What was striking was the president’s sobriety about the issue, his evident pride in the global diplomatic efforts that produced the latest resolution and his determination to pressure the Tehran regime as much as possible. It was clear that he had no illusions about Iran. When he talked about his “engagement” strategy of the first year, it was not with wistful laments of what might have been or hope about future Iranian willingness to take up the offer to talk seriously about its nuclear program. Rather, Obama described it as a successful tactic in the effort to isolate and put pressure on the regime. By revealing to the world just how unserious the rulers in Tehran were about talks, by proving beyond a doubt that if there was an impasse in the U.S.-Iran relationship, the problem was not in Washington, he had set the stage for Iran’s international isolation.

The president also expressed his belief that the sanctions are already starting to pinch the regime. What was interesting, however, was that he did not take this as a sign that there might now be a new opportunity for diplomacy. He and his advisers disparaged recent Iranian mumblings about resuming talks with the “P5-plus-1” (the United States, Russia, China, France, Britain and Germany) as nothing new. And they displayed no eagerness to press for renewed talks or to make new dramatic gestures. The president went out of his way to note that the Iranians are masters of delay and deception. He explained in some detail why the deal Turkey and Brazil struck with Tehran was a nonstarter. He repeatedly acknowledged that the regime may be so “ideologically” committed to getting a bomb that no amount of pain would make a difference. He did make clear that the door was, of course, open to the Iranians to change their minds, that sanctions did not preclude diplomacy and engagement, and that if the Iranians ever decide they wanted to “behave responsibly” by complying with the demands of the international community, then the United States was prepared to welcome them.

It is here that this very straightforward briefing took a bizarre and amusing turn. Some of the journalists present, upon hearing the president’s last point about the door still being open to Iran, decided that he was signaling a brand-new diplomatic initiative. They started peppering Obama with questions to ferret out exactly what “new” diplomatic actions he was talking about and, after the president left, they continued probing the senior officials. This put the officials in an awkward position: They didn’t want to say flat out that the administration was not pursuing a new diplomatic initiative because this might suggest that the administration was not interested in diplomacy at all. But they made perfectly clear — in a half-dozen artful formulations — that, no, there was no new diplomatic initiative in the offing. As one bemused senior official later remarked to me, if the point of the briefing had been diplomacy, then the administration would have brought its top negotiators to the meeting, instead of all the people in charge of putting the squeeze on Iran. Some journalists nevertheless left with the impression that the big “news” out of their meeting with the president was a possible new round of diplomacy.

I left feeling sympathy for this and every administration. Apparently, even spoon-feeding doesn’t work. The “news” out of this briefing was that the administration wanted everyone to know how tough it was being on Iran. I was especially struck by the remarks of a senior official, who pointed out that one effect of Iran’s growing economic difficulties has been strikes in the bazaars. The student and opposition demonstrations of the past year have been political, but these protests are about economics. If the two ever join, this official suggested, that would pose a real threat to the regime. An interesting point — though not to the assembled journalists.

Robert Kagan, a senior associate at the Carnegie Endowment for International Peace, writes a monthly column for The Post.

Iranian companies to mine for minerals in Venezuela, Khan says

Bloomberg: Venezuela will work with Iranian companies to mine...