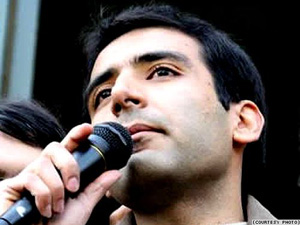 Tavakoli’s brother, Ali Tavakoli, told RFE/RL that neither Majid’s lawyer nor his family were told that Majid had been transferred on August 15 to the prison in Karaj, which is 20 kilometers outside of Tehran.

“One of our friends from Rajaeeshahr prison told us that he saw Majid in the quarantine section,” Ali Tavakoli told RFE/RL. “Our last contact with Majid was 22 days ago.”

Ali Tavakoli said the family has no knowledge of Majid’s health. They said he was one of 17 political prisoners who recently went on a hunger strike for several weeks.

At one point during the strike, Tavakoli was reportedly transferred to the hospital in Evin prison due to failing health.

Ali Tavakoli said that his parents are old and in poor health and therefore unable to visit the prison frequently.

Majid Tavakoli — one of the most prominent symbols of Iran’s embattled student movement — was arrested in December 2009. His arrest came shortly after he accused the Iranian government of human rights abuses and of “enmity against democracy” during a rally at Tehran’s Amirkabir University.

Rajaeeshahr has been described by some news organizations as a notorious prison, where political prisoners are often transfered as punishment.

Ali Tavakoli told RFE/RL that his brother has not been charged with any crime or sentenced.

AFP: Russia will support a ban on shipments to...