AFP: Russia on Wednesday defended the nuclear power plant it is building for Iran in the southern city of Bushehr, days ahead of a ceremony to mark the formal launch of the controversial facility. 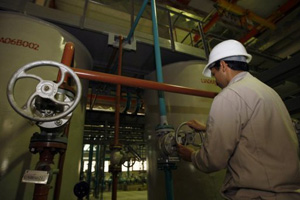 SOCHI, Russia (AFP) — Russia on Wednesday defended the nuclear power plant it is building for Iran in the southern city of Bushehr, days ahead of a ceremony to mark the formal launch of the controversial facility.

Foreign Minister Sergei Lavrov described the plant as an “anchor” that would keep Iran firmly fixed to peaceful use of nuclear power.

“It is a most important anchor which keeps Iran within the regime of non-proliferation,” he told reporters on the sidelines of a regional summit in the Black Sea resort of Sochi.

“It is fully protected from any proliferation risks whatsoever. This idea is shared by all the leaders of Western countries,” he added.

The charging of the first nuclear fuel at the plant Saturday is to be marked at a ceremony in Bushehr including the head of Russia’s nuclear agency, Sergei Kiriyenko.

Russia has been building the plant in since the mid-90s but the project has been marred by a series of delays and the issue is hugely delicate amid the standoff over Iran’s nuclear programme.

Russian officials have emphasised that it would still take some time for the 1,000 MW capacity power plant to start significant work, with the facility operating at minimal power of one percent after 3-4 months.

Western countries accuse oil-rich Iran of seeking to acquire a nuclear weapon under the guise of its civilian nuclear programme. But Tehran insists the drive is entirely peaceful and it needs nuclear energy for a rapidly expanding population whose fossil fuels will eventually run out.