Iran pastor guilty of being a ‘Zionist, traitor’: official

AFP: Iranian pastor Yusef Nadarkhani should face the death penalty for being a traitorous “Zionist” and committing “security crimes,” not for apostasy, an official said Friday according to Fars news agency, amid a Western outcry over his sentence. 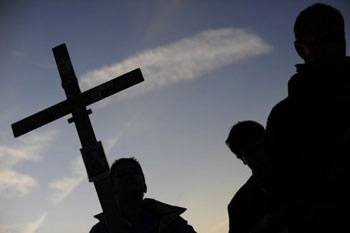 TEHRAN (AFP) — Iranian pastor Yusef Nadarkhani should face the death penalty for being a traitorous “Zionist” and committing “security crimes,” not for apostasy, an official said Friday according to Fars news agency, amid a Western outcry over his sentence.

Nadarkhani’s lawyer told AFP that the remarks by Gholam-Ali Rezvani, deputy governor general of the northern province of Gilan, where the pastor’s case is being reheard, were the first time security offences had been mentioned.

Rezvani’s comments were also the first public remarks by an Iranian official about Nadarkhani’s case.

“The issue of crime and of capital punishment of this individual is not a question of faith or religion — in our system, one cannot be executed for changing their religion,” Fars quoted Rezvani as saying.

Nadarkhani was, however, “a Zionist, a traitor and had committed security crimes,” said Rezvani, who is responsible for security and political affairs in the province.

“On the apostasy, that is exactly what we were told in front of the court,” he said. “However, there was no mention of security offences during the trial. These new accusations should be examined by the courts.”

Nadarkhani, now 32, converted from Islam to Christianity at the age of 19 and became pastor of a small evangelical community called the Church of Iran.

He was arrested in October 2009 and condemned to death for apostasy under Islamic sharia law, which allows for such verdicts to be overturned if the convicted person “repents” and renounces his conversion.

After his conviction was upheld by an appeals court in Gilan province in September 2010, Nadarkhani turned to the supreme court.

In July, the supreme court overturned the death sentence and sent the case back to the court in his hometown of Rasht, in Gilan province.

Dadkhah said on Wednesday he was “optimistic” Nadarkhani could be set free.

“Our last court session was held on Wednesday. Mr Nadarkhani did not repent and the last court verdict said he would face a death sentence if he did not,” he said.

“However, we offered our explanations and I think the court was convinced. I am optimistic there is a 95 percent chance he will be released in the final ruling, which I expect by the end of next week,” Dadkhah added.

Several Western countries have condemned the death sentence against Nadarkhani and called for his release, including the United States, Britain, Germany, France and Poland, current chair of the European Union.

US warns Lebanon against Ahmadinejad visit to South

Reuters: The U.S. State Department said on Tuesday it...