AFP: The United States placed sanctions Tuesday on two top Iranian military figures for their roles in the brutal crackdown on dissenters in the wake of the June 2009 election. 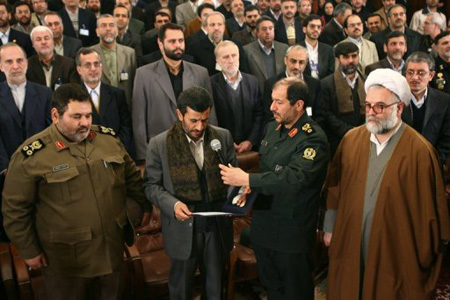 WASHINGTON (AFP) — The United States placed sanctions Tuesday on two top Iranian military figures for their roles in the brutal crackdown on dissenters in the wake of the June 2009 election.

The US Treasury named Major General Hassan Firouzabadi, chairman of Iran’s Joint Chiefs of Staff, and Revolutionary Guard Deputy Commander Abdollah Araqi under the sanctions, which forbid Americans from any business relations with them and freeze their assets in the US.

In 2009 Araqi commanded an elite Tehran division of the Guard that was responsible for security after the election and played “a key role” in the crackdown on the protesters, the Treasury said.

“The Iranian people have suffered tremendously at the hands of senior officials, who instead of protecting their basic rights have ordered and orchestrated widespread, serious human rights abuses aimed at silencing criticism and punishing dissent,” said Adam Szubin, director of the Treasury’s Office of Foreign Assets Control.

“In support of the Iranian people’s quest for justice and accountability, we are taking further action today to expose the involvement of senior Iranian government officials in serious human rights abuses,” he said in a statement.

Protests broke out in Tehran following President Mahmoud Ahmadinejad’s reelection victory in the 2009 vote, which was heavily criticized for irregularities.

The protests, which went on for months, led to a harsh crackdown by security forces which saw many demonstrators and opposition political figures jailed.