AFP: Washington is seeking to free two US citizens held in Cuba and Iran, but has rejected a deal with Havana to swap a jailed American for five Cuban spies, top diplomat John Kerry said Wednesday. 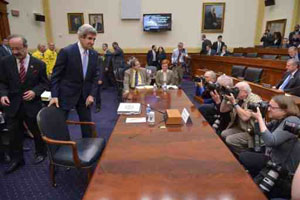 WASHINGTON (AFP) – Washington is seeking to free two US citizens held in Cuba and Iran, but has rejected a deal with Havana to swap a jailed American for five Cuban spies, top diplomat John Kerry said Wednesday.

Kerry told US lawmakers that officials were working hard to win the release of contractor Alan Gross held for more than three years in Havana.

“They were and have been attempting to trade Alan Gross for the five spies that are in prison here in the United States, and we’ve refused to do that because there’s no equivalency,” the secretary of state said.

“Alan Gross is wrongly imprisoned, and we’re not going to trade as if it’s a spy for a spy, which they’re trying to allege.”

Gross, 63, was arrested on December 3, 2009 for illegally distributing laptops and communications gear to members of Cuba’s small Jewish community. At the time, he was working for a firm contracted to the US State Department.

In March 2011 he was sentenced to 15 years in prison for “acts against the independence or territorial integrity” of Cuba, and relatives fear his health is failing.

Kerry said he hoped that the United States could appeal to Cuba’s communist leaders to treat Gross’s case as a “humanitarian” issue.

Kerry also said he had been working through back channels to try to find out more about retired FBI agent Robert Levinson, who disappeared some six years ago while on a trip to Iran.

“On Levinson, I have actually engaged in some back-channel diplomacy in an effort to try to see if we can get something done there,” Kerry said.

“That has been raised at very high levels, and it is not a forgotten issue by any means. We’re on it.”

Reuters: Washington is using satellites to spy on Iran's...

By Jubin Katiraie An Iranian political prisoner is in...