AFP: The United States and Israel on Thursday slammed a bid by Iran and Syria to get seats on the UN Human Rights Council. Acting US ambassador to the United Nations, Rosemary DiCarlo, called the campaigns “highly inappropriate” because of the two countries’ records on human rights. 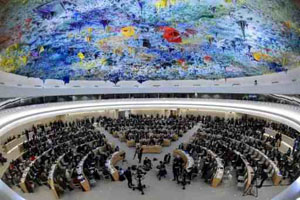 UNITED NATIONS (AFP) — The United States and Israel on Thursday slammed a bid by Iran and Syria to get seats on the UN Human Rights Council.

Acting US ambassador to the United Nations, Rosemary DiCarlo, called the campaigns “highly inappropriate” because of the two countries’ records on human rights.

They will be in competition with China, Jordan, Maldives, Saudi Arabia and Vietnam, diplomats said.

A vote on 14 council seats that come up for renewal will be held at the UN General Assembly in New York in November.

Iran is a member of the UN Commission on Women’s Rights, and Syria is on UNESCO’s human rights committee.

Syria tried to get a two-year term on the 47-member Human Rights Council in 2011 but withdrew because of the controversy over President Bashar al-Assad’s brutal attempt to put down an uprising that started that year.

The UN estimates that up to 100,000 people have now been killed in the uprising that has turned into a civil war.

Iran’s rights record is regularly attacked by watchdogs, and it is a key backer of Syrian President Bashar al-Assad as he battles opposition rebels.

Diplomats and non-governmental groups such as Human Rights Watch have all predicted that both Syria and Iran would struggle in any vote by the 193 member General Assembly.

“We expect the Asian states to face intense lobbying now over this slate,” said one diplomat from the region.

Regional groups hold their own mini-elections to select preferred candidates, which are normally put through without opposition.
US ambassador DiCarlo told reporters that neither country had yet submitted required documents to back their candidacies.

Israeli ambassador Prosor was stunned at the news of the bid by Iran and Syria, both avowed opponents of Israel.

“This might be a new world record for lunacy at the United Nations,” he said. “Putting Iran and Syria on a Human Rights Council is like putting the Godfather in charge of a witness protection program.”

Human Rights Watch and other groups have also raised questions about the candidacies of Saudi Arabia, China, Vietnam, Cuba and Russia on the list for two-year terms.