I was lucky to escape with my life

The Independent: Social media has made it harder for governments to cover up their abuses.  For me this realization has poignant implications. Perhaps the lives of thousands of innocent people, many of them my close friends, could have been saved in my native Iran.
The massacre of Iranian political prisoners in 1988 must now be investigated

Thousands were executed simply for their support of the PMOI 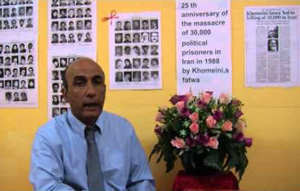 Social media has made it harder for governments to cover up their abuses.  For me this realization has poignant implications. Perhaps the lives of thousands of innocent people, many of them my close friends, could have been saved in my native Iran.

As a human rights activist who spent 11 years in the prisons of the Iranian regime – five-and-a-half in solitary confinement – I am one of the few survivors of Iran’s 1988 massacre of political prisoners.

A quarter-century ago in July 1988, I was in the clinic of the notorious Evin prison in Tehran. I had been arrested in 1981 at 17 on the charge of supporting the main opposition People’s Mojahedin Organization of Iran (PMOI/MEK) and selling its publication. In 1988, while I was in solitary confinement, I  had been brutally flogged on the soles of my feet with cables. Due to severe bleeding, I became unconscious in my cell and was transferred to hospital clinic.

When I regained consciousness, an apolitical prisoner who was also hospitalized asked my name. “Mostafa Naderi,” I responded. He repeated my name with surprise as though he knew me. He said, “They came and called your name several times.“ It took me a while to find out what was going on.

In my way back to my cell a few days later, I  saw the doors of the cells on both sides of the corridor were wide open and the belongings of the prisoners were are all lined up in front of the cells. But all the 60 cells were completely empty.

A few days later, when I was transferred from solitary confinement to ward 325,  I got a glimpse of what happened.  Through other prisoners I discovered that Khomeini had issued a fatwa ordering the massacre of political prisoners, particularly the MEK supporters. I realized that all the prisoners who were in the 60 empty cells that I had passed a few days earlier were executed. No one was spared.

The so-called ‘Pardoning Committee’ that Khomeini had dispatched to prisons, was in fact a ‘Death Committee’ personally appointed by Khomeini. Before this committee a prisoner was essentially asked one question:  “Are you still loyal to the MEK?”  Anyone who responded short of total repentance and submission faced execution. Victims were charged with “moharebeh” or “waging war on God.” This meant resisting the mullahs’ rule.

The prison assembly hall became a slaughterhouse. Prisoners were rounded up in lines of six in various groups. A noose was placed around each neck. Prison guards kicked the chairs under their feet, collectively hanging them. The bodies were transferred to mass graves in meat trucks at night. On some nights, up to 400 were executed.

Later, I heard that guards had on several occasions visited my cellblock and called my name. They were in such haste, they left after failing to find me.

I was eventually released in 1991. After a few months, I managed to secretly leave Iran, going first to Turkey and later to Canada. During the few months in Iran that I was out of prison, I tried very hard to establish the real scope of 1988 massacre. Nobody still knows the exact scope and it might never be established before the mullahs’ downfall. But given the number of inmates and in light of reports from various prisons, the victims totaled at least 30,000 political prisoners, mostly PMOI sympathizers.

By the time the international community learned about it, it was too late.  A few verbal condemnations followed but nothing more. Fortunately Facebook and Twitter exist today. The world hears about victims in a matter of minutes.

As Maryam Rajavi, the leader of the Iranian resistance has said, the time has come for the UN to examine this crime against humanity, to investigate the massacre of 1988 and bring the guilty to justice.