AFP: In a case that has provoked surprise in Iran and across the world, the killer, known only as Balal, was saved dramatically on Tuesday, as a crowd looked on, awaiting his execution.  Samereh Alinejad pardoned the killer of his son, imparting only a slap on his face as punishment. 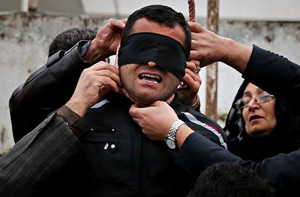 Tehran – AFP – The young Iranian man who escaped a hangman’s noose with just seconds to spare when his victim’s mother intervened was the beneficiary of a high-profile campaign to save his life.

In a case that has provoked surprise in Iran and across the world, the killer, known only as Balal, was saved dramatically on Tuesday, as a crowd looked on, awaiting his execution.

He survived despite the mother of the man he murdered in a street fight seven years ago refusing an offer of so-called blood money until the very last moment at the gallows.

As the blindfolded convict awaited his fate, a grieving Samereh Alinejad, who lost another son in a motorbike accident four years ago, emotionally asked out loud if those watching the spectacle unfold knew “how difficult it is to live in an empty house?”

Instead of participating in “qisas” — in which under the sharia law of retribution relatives can push away the chair on which the condemned man stands — Alinejad pardoned the killer, imparting only a slap on his face as punishment.

According to the United Nations, more than 170 people have been executed in Iran since the beginning of 2014.

But under the country’s interpretation of Islamic laws in force since the 1979 revolution, a victim’s family has the right to spare a convict’s life in return for financial payment.

Film director Mostafa Kiaei told AFP that other relatives of Abdollah Hosseinzadeh, whom Balal stabbed to death in 2007, favoured taking the blood money he and others had raised, but the family had not been unanimous.

Iran’s Shargh newspaper said police officers had led Balal, black-hooded, to the execution site in the northern city of Nowshahr.

Widely published photographs captured the drama, with the killer gritting his teeth, seemingly ready for death.

But after slapping him, Alinejad removed the hangman’s rope with the help of her husband, Abdolghani Hosseinzadeh, a former professional footballer.

“I am a believer. I had a dream in which my son told me that he was at peace and in a good place,” Alinejad was quoted as saying. “After that, all my relatives, even my mother, put pressure on me to pardon the killer.”

The “slap was the space between revenge and forgiveness”, she added. “Now that I’ve forgiven him, I feel relieved.”

Murder and several other crimes are punishable by death in Iran.

The campaign to save Balal was launched last month by Kiaei and celebrities including Adel Ferdosipour, a football commentator and TV show host, and Ali Daei, a former international footballer, asking the family to forgive the killer.

“This convict was the same person that we raised money for him to pay the blood money,” Kiaei told AFP.

The cash came from ticket sales to a special screening of the director’s latest film, “Special Line”, with the proceeds being paid into a special account.

“The father of the victim wants to spend the money on building a gym under his son’s name in their city,” Kiaei said. “Even a few days after the show people were still depositing money.”

Asked if he felt the public appeal had been decisive, Kiaei added: “Considering the shortage of a presence of NGOs in our country, I think those people who have tools, like us whose tool was the film or Adel Ferdosipour whose TV show has a big audience… can encourage people to do good things.”

Meanwhile, it was reported Thursday that a group of Iranian artists has launched an appeal against a woman’s execution.

Reyhaneh Jabbari, 26, was sentenced to death for the murder of a former government intelligence official, and it has been suggested that her punishment could be imminent.

Her lawyer Abdolsamad Khoramshahi, however, told AFP on Thursday that no sentencing date had been set.

Gates all but rules out strike on Iran