Video calling for action to stop executions in Iran released 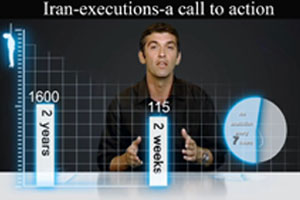 A young man who has lost his father to the actions of the clerical Iranian regime calls upon people all across the globe to unite against “flagrant human rights violations” taking place as we speak in Iran, particularly against the increasing executions that are taking place during Hassan Rouhani’s tenure.

In the 1.5 minute long video that was published he presents the shocking figures of some 1600 executions in less than two years in Iran that includes almost 115 hangings in just two weeks. According to his information every seven hours one person is executed in Iran and according to the UN the actual figures are much higher as many of the hangings are not made public and are carried out in secret.

The video also calls upon the people to join the Iranian communities abroad in their upcoming gathering in Paris on June 13 to stop these violations of human rights in Iran.