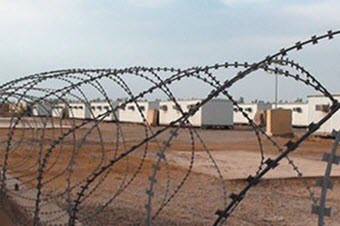 The issue of Iranian dissidents living at Camp Liberty, Iraq is a pressing humanitarian issue that deserves our immediate attention. They have been subject to several deadly attacks by terrorists affiliated with the Iranian regime and Iraqi security forces during the tenure of Prime Minister Nouri al-Maliki, resulting to 140 being killed and more 1300 injured. The last attack on these defenseless refugees took place on October 29, 2015, resulting in the deaths of 24 of them. In this light, the efforts of the government of Albania to host the Iranian dissidents are commendable.

The Italian Helsinki Committee has for several years been following the plight of Iranian refugees in Iraq, members of the People’s Mojahedin Organization of Iran (PMOI or MEK), the principal Iranian opposition movement. As such, the Secretary General of the Italian Helsinki Committee was part of the last delegation of foreign dignitaries who visited Camp Ashraf, the former place of residence for Iranian dissidents in Iraq, in 2008 prior to its hand-over to the Iraqi government and the imposition of a total siege on the camp at the behest of the Iranian regime.

We would like to take the opportunity to warn about the obstacles of resettlement of the residents of Camp Liberty.

There has been a growing international consensus across Europe and the US over the need to relocate the members of the MEK in line with their status as protected persons under the Geneva conventions. The only parties that have been obstructing these efforts throughout the past decade have been the Iranian regime and its agents in Iraq.

Tehran wants to see the MEK destroyed for two reasons: On one hand it represents a formidable opposition to Tehran’s theocracy, and on the other it has been a bulwark against Tehran’s campaign to export Islamic fundamentalism. The Iranian regime wants to see the residents of Camp Liberty either massacred or forced to surrender to Tehran.

Our committee has noticed that since 2011, when the Iranian dissidents agreed to the European Parliament plan to be relocated to third countries, Tehran has been engaged in an organized, orchestrated campaign to derail the process and has used a variety of means to pursue this purpose. The regime has not been coy about its intentions of massacring the Iranian dissidents, but has made its sinister objectives known publicly and has devoted considerable resources to this goal over the years.

Parallel to the military attacks, the Iranian regime, through its intelligence agents, has resorted to a malicious demonization campaign to obstruct the transfer of the Iranian dissidents to safe locations, thus setting the stage for their massacre.

In this light, the Italian Helsinki Committee commends the attitude of the government of Albania to host a significant number of Camp Liberty residents. It indicates the correct value that both the government and the people of Albania place on human rights. In our view, the EU countries and U.S. should commend the noble position of Albania on this pressing humanitarian issue.

Albania’s attitude is not only commendable on humanitarian grounds but also points toward a correct policy vis-a-vis the Iranian regime, which has the highest number of executions per capita the world over, is the central banker of terrorism and has been the main backer of Bashar al-Assad in massacring Syrian civilians and causing an influx of refugees to Europe.

We have noticed that subsequent US Secretary of State John Kerry’s trip to Albania on February 14, the Iranian regime has stepped up its demonizing campaign against the Iranian dissidents and against the government of Albania.

Anne Singleton and Massoud Khodabandeh (who, according to an investigative report by the Pentagon released by the Federal Research Division of the Library of Congress in December 2012, are agents of the mullahs’ Ministry of Intelligence and Security) are active in this campaign.

The British Parliamentary Committee for Iran Freedom, a cross party committee in the UK Parliament that enjoys broad based support in the Parliament, broke the cover of these two individual in a 2007 report titled “Spying for the Mullahs.

The objective of this campaign is to dissuade third-party countries and in particular the Government of Albania from hosting the residents of Camp Liberty, by repeating and disseminating unfounded malicious allegations against the Iranian dissidents.

The Italian Helsinki Committee has been scrutinizing the dreadful situation of human rights in Iran and has dealt with Iranian dissidents for the past three decades. In this capacity it has become familiar with these allegations, and has studied them carefully. It is totally clear to us that all of the allegations and the smear campaign against the Iranian opposition are orchestrations of the Iranian intelligence service and its agents.

The MEK is the pivotal force of the National Council of Resistance of Iran. It advocates a democratic, anti-fundamentalist Islam. The activists of the MEK have been the primary victims of the Iranian regime’s brutal theocracy and some 120,000 of them have been executed in the past three decades. Maryam Rajavi, the President of the NCRI, has articulated a ten-point plan for the future of Iran that stipulates total gender equality, abolishment of the death penalty, a non-nuclear Iran, free and fair elections, an end to institutional discrimination against women and minorities, a free-market economy, and freedom of expression and association.

Over the years, the Iranian Resistance was instrumental in revealing the most secret sites and aspects of the Iranian regime’s clandestine nuclear projects, at tremendous risk to the MEK activists. If it were not for these revelations, Tehran might have obtained nuclear weapons by now. The network of the Iranian resistance has also been instrumental in exposing Tehran’s gross human rights violations and its terrorist conduct worldwide.

The MEK enjoys extensive support among the Iranian Diaspora. More than 110,000 individuals took part in the last major gathering of the Iranian resistance in Paris in June 2015.

On the international front, the MEK enjoys the support of a majority of members of more than 45 national legislatures. That includes bi-partisan support from a majority of the US House of Representatives and dozens of US Senators. Scores of the most senior US officials dealing with national security matters in four administrations, along with top US military commanders, have expressed their support for the MEK and the need for necessary steps to guarantee the safety and security of its members at Camp Liberty, Iraq.

Many Nobel laureates have also expressed support for the safety and security of these people.

Reuters: U.S. lawmakers are embarking this summer on a...