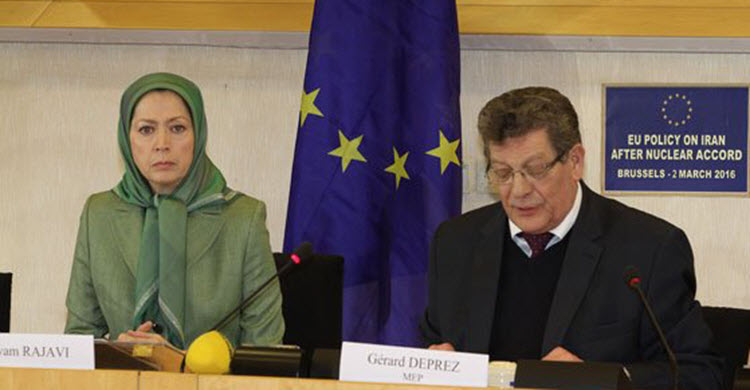 Maryam Rajavi spoke to the meeting on the sham elections in Iran. She was of the view that the Iranian regime is a promoter of terrorism. Its factions have plundered public wealth. Additionally, the lections are a sham and will not lead to moderation, according to a statement by the National Council of Resistance of Iran.

In her remarks, she said that the so-called election was held without the presence of any opposition groups. It was in fact a race among present and former officials in charge of torture and executions. The election’s outcome will not change anything in the political or economic life of the nation.

She added that the regime’s former president Ali Akbar Rafsanjani and his cabinet members are pursued by the German, Swiss and Argentine judiciaries for their terrorist crimes in foreign countries. The 2.5 years of Rouhani’s presidency is also marked by at least 2300 executions and stepped up massacre of the people of Syria. Khamenei who relies on the Revolutionary Guards Corps, will not abandon power, either.

She said that the goal must be regime change. Any change in the regime would lead to its general weakness and entirely paralyze it, ending up in the regime’s ultimate overthrow.

Mrs. Rajavi also pointed out that the European Union had turned a blind eye on the Iranian regime’s complicity in the massacre of the people of Syria and human rights violation in Iran. She warned that failure to adopt a decisive policy on human rights abuses in Iran would embolden the mullahs to resume their bomb-making project. They were engaging in the genocide of the people of Syria and this interference in regional conflits must be contained.

With the money it gets from the West after lifting of sanctions, the Iranian regime buys advanced weapons for Assad to massacre the people of Syria and send waves of refugees to the West.

Rajavi drove home the point that the solution to the tragedy in Syria, the crisis in Iraq and instability in the Middle East will be found only after the IRGC is expelled from those countries. The most dangerous thing is to engage and involve the Iranian regime in the case of Syria.

AFP: Iran's promised suspension of uranium enrichment is not...