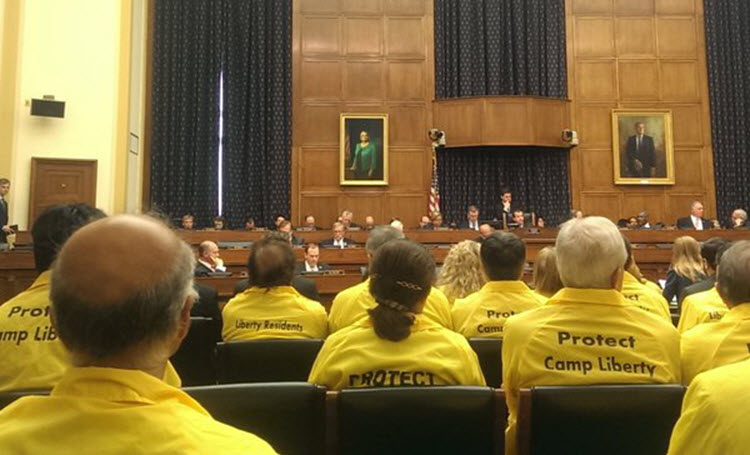 Washington, 19 May – Iranian dissidents living in Camp Liberty, Iraq, may be better protected following a resolution passed by the United States House of Representatives Foreign Affairs Committee on Wednesday.

The Foreign Affairs Committee voted to support an increase in safety and security for the members of the main Iranian opposition group People’s Mojahedin Organisation of Iran (PMOI or MEK) in Camp Liberty following rocket attacks last October and a recent tip-off of future attacks.

The Committee’s Ranking Member, Eliot Engel (D-NY) said, “The residents of Camp Liberty deserve to live in dignity and without fear of violence”.

The resolution, introduced by Rep. Ted Poe (R-TX), will protect Iranian dissidents who are awaiting resettlement by the United Nations High Commissioner for Refugees (UNHCR). The main points of the resolution are:

There are approximately 2,000 unarmed members of the MEK awaiting resettlement in Camp Liberty. The UNHCR recognises these people as “persons of concern” and “in need of international protection” because they live in constant danger of attacks from pro-regime forces

Ed Royce, Chairman of the US House Committee on Foreign Affairs, said: “This past October, 23 residents of Camp Liberty were killed in a rocket attack on the camp. And we have been receiving information that the Iranian regime and their proxies in Iran are preparing for an imminent attack against the camp’s residents. That is why Mr. Poe’s resolution calls on the Administration and the Iraqi Government to work to provide camp residents with the protections they need, and to ensure they are expeditiously resettled outside of Iraq, in such safe-havens as Albania”.

This initiative has been met with great praise from the Organization of Iranian American Communities (OIAC-US). They said that their community was indebted to the bi-partisan House members who have worked on the proposal.

In total, 140 MEK members have been killed, seven were abducted and over 1,300 have been injured as a result of the attacks from pro-Iranian regime forces, according to US lawmakers.

Starving workers in Iran forced to search waste-bins for food