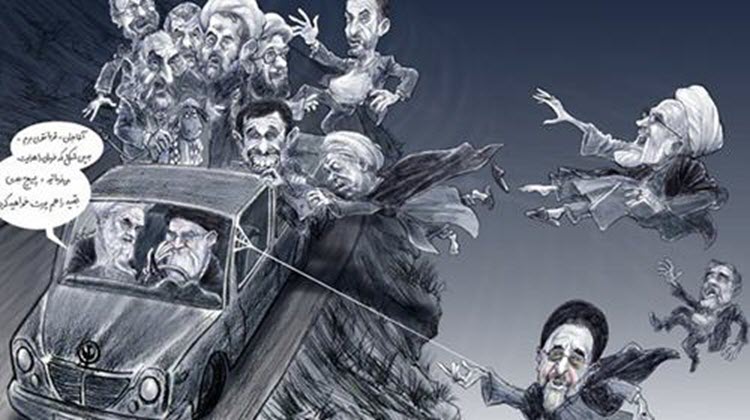 On June 1, the state-run Jam News website reported that the FATA had arrested two people, aged 30 and 31, for publishing cartoons of the regime officials on the internet.

Ali Sheybanian, Fasa’s police chief, said: “These two individuals intended to disturb public opinion and sow discord among the population by publishing caricatures of the authorities and offensive texts in cyberspace.”

This news comes just one week after police arrested a 15-year-old for trying to launch a channel on a social media site.

A police commander of the regime in Isfahan, central Iran, announced that the FATA had arrested the teenager.

On May 26, Jahangir Karimi said: “After the final investigation, the 15-year-old teenager from Isfahan was identified quickly and summoned to the police.”

The FATA are responsible for monitoring cyber activities; their most infamous case is that of blogger Sattar Beheshti who was killed under torture while in the regime’s custody in 2012.
The FATA also arrested two young webloggers and charged them with computer crimes.

Colonel Iraj Mohammadkhani, the head of the FATA police in Gilan Province, said that they had illegally accessed, produced, and distributed data and software.

In March, Reporters Without Borders (RSF) said Iran is one of the world’s five biggest prisons for media personnel; ranked 173 out of 180 for press freedom.

Shahin Gobadi of the Foreign Affairs Committee of the National Council of Resistance of Iran (NCRI) said: “Freedom of the press and freedom of expression are non-existent in Iran under the mullahs’ regime. Not only does the regime severely clamp down on journalists for reporting on subjects considered sensitive by the mullahs, it even goes so far as arresting and torturing to death dissident bloggers such as Sattar Beheshti.”

These days, the drop in Iran’s stock index has...