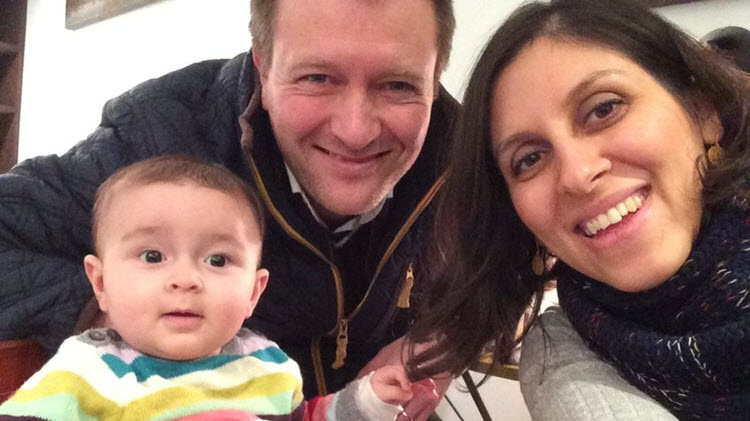 London, 26 Jun – The husband of Nazanin Radcliffe, a British aid worker arrested in Iran earlier this year, has issued a statement regarding the accusations levied against her.

Richard Radcliffe’s statement was released via Change.org, on the petition that he created in order to get his wife released.

He reiterates that Iranian press coverage that Nazanin was accused of leading a soft coup to overthrow the Iranian government, and spying. This news came less than a week after the Iranian Revolutionary Guards Corps (IRGC) told Nazanin that she would be released without charge.

Mr. Radcliffe said: “There is something breath-taking about taking a mother and baby while on holiday – even for the Revolutionary Guard. But to accuse Nazanin of running a global spy operation with a 2-year old [their daughter Gabriella, who is in the custody of her maternal grandparents] in tow seems beyond ludicrous – something out of Monty Python as much as Kafka. “

He detailed the interrogation tactics used by the Iranian authorities. You are forced to hand over the logins for your email and social networking sites, which the IRGC will dredge through looking for anything remotely incriminating; sharing news posts about the Iranian regime, ‘suspicious’ LinkedIn connections. Then they subject prisoners to intense interrogations until a confession, no matter how coerced, is made. In the state-run media, Nazanin has been vilified.

Mr. Radcliffe said: “The Revolutionary Guard knows Nazanin works for a charity rather than anything more sinister. They know she has no work dealings with Iran…Ironically she actually voted for President Rouhani, while many around us were too cynical. After 80 days of confinement, psychological pressures, and repeatedly dangling a return to her baby, of course, they know everything about her.”

The Iranian government has refused her access to a lawyer for 83 days, claiming that they needed to check if he was on their list. Mr. Radcliffe asserts that there is no list.

He said that he thought this is part of the Iranian regime’s plan to scare emigrants from bringing back and spreading Western ideas.

On Tuesday, there will be a virtual candlelit vigil from 9-11pm. For details, visit the FreeNazanin Facebook page and use the #candlesforfreedom on social media.

On July 9, a rally will be held in Paris by supporters of the Iranian resistance. They wish to bring to light the horrific abuses of the regime, as in the case of Nazanin, and to call on Western governments to condition their relation with Iran with an end to human rights suppression within the country.