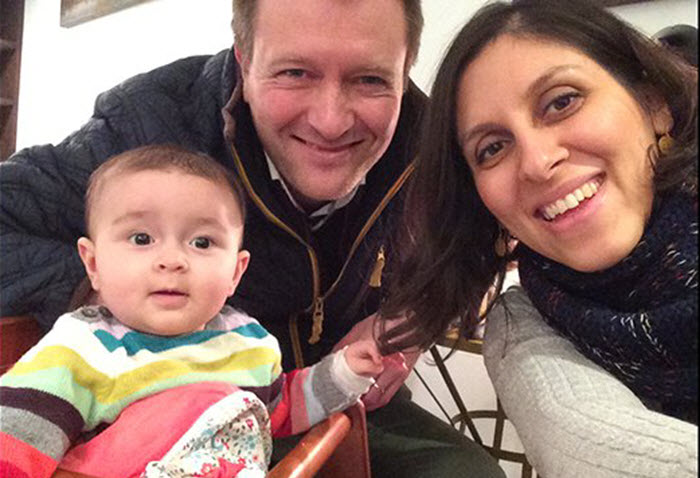 London, 27 Jul – The husband of a framed British-Iranian political prisoner has slammed the UK government for their failure to ensure the safe release of his wife and child.

Richard Ratcliffe, who took to the petition site Change.org to demand the release of Nazanin, released a statement decrying the UK government for not even raising Nazanin’s case in the past three and a half months, despite national news attention and nearly 800,000 signatures on the petition. His parents tried to get the attention of their local MP; it took over 100 days.

He said: “Particularly strange has been the quietness. No British politician has ever criticised the Iranian actions. On Nazanin’s 100th day [in prison], the Foreign Secretary was invited to condemn Iran’s actions in Parliament – when the Revolutionary Guard had openly admitted to holding a British mother and baby hostage. He chose not to.”

He said that this was in effect “doing the Iranian authorities’ job for them”.

Radcliffe cites a strange emphasis on Nazanin’s ‘dual’ nationality and respecting the Iranian Regime’s position. The fact is that you cannot renounce Iranian citizenship, so Nazanin has no choice in this matter.

He said: “There is nothing ‘dual’ about Nazanin’s detention – she was initially taken because of her links to British media charities, she is held as a hostage because her British passport makes her and Gabriella collateral. No other reason why the Iranian authorities took Gabriella’s passport. No obvious reason why the UK has never asked for it back.”

The UK has done less for Nazanin’s release than other Western governments have done for their citizens.

The US has warned dual nationals not to travel to Iran; the UK actively promoted it although, under the new government, this has now changed. The US issued a resolution calling on Iran to release US prisoners being held without charge; the UK asked for more information. The Canadian Foreign Minister met the family of Canadian hostages within weeks, the UK Foreign Minister still hasn’t.

Ratcliffe does express appreciation for the support of the Foreign Office who have shown “sincere care” over Nazanin’s case.

Radcliffe asks that Theresa May’s government turn Nazanin’s case over to the Foreign Office’s hostage team and that UK officials call for Nazanin’s release and push for consular access to Nazanin.

Reuters: Despite a diplomatic thaw, Western banks are steering...