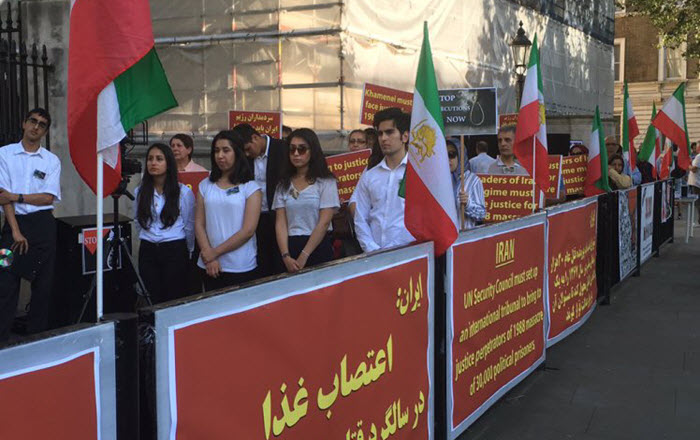 London, 8 Aug – Human rights campaigners are in the middle of a three-day hunger strike outside Downing Street to pressure the United Kingdom government into denouncing Iran’s mass execution last week.

This state-sanctioned murder has drawn criticism from the National Council of Resistance of Iran (NCRI), who hope to spur not just the Houses of Parliament but also the UN Security Council and UN Human Rights Council, to criticise the murders.

Hossein Abedini, a member of the NCRI’s foreign affairs committee, said that this has sparked fears that there are more executions to come.

He told METRO: ‘The situation in Gohardasht and other parts of Iran has really worsened. I think it’s really very important [we get UK Government support] because a large number of MPs and Lords recently issued a statement and calling for cross-party support concerning Iran. There is a lot of concern about the brutal hangings and torture.”

Abedini added: “It very important the massacres of 1988 are recognised as a crime against humanity and that very robust measures are now introduced.”

The British Parliamentary Committee for Iran Freedom released a statement on Thursday decrying the executions, asking the government to recognise the 1988 execution as a crime against humanity and dismissing the myth of moderation.

The statement read: “These latest executions come as the Iranian authorities intensify pressure on political prisoners by imposing severe punishment and denying them medical care in its prisons.”

It continued: “It is once again clear that the human rights situation in Iran has not changed but rather has worsened in many areas including arbitrary arrest of dual citizens, suppression of women and of Iran’s religious and ethnic minorities.”

Protesters will gather in Whitehall from 3pm until 7pm tonight.

Obama’s briefing on Iran: It’s about pressure, not diplomacy

Washington Post: The White House called in a small...