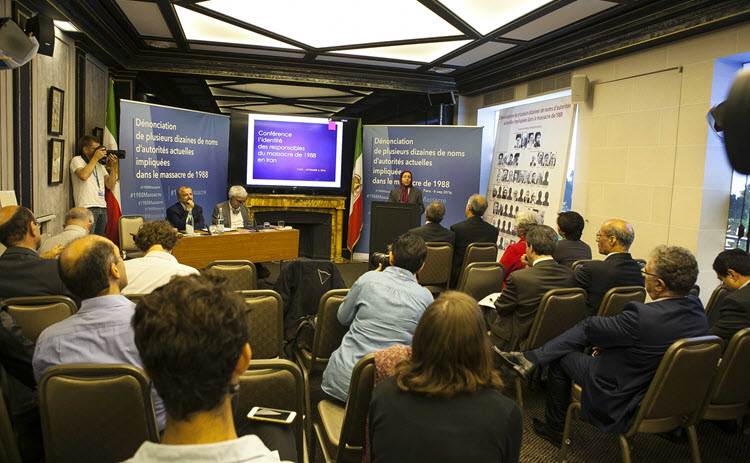 London, 7 September – The names of 59 senior Iranian officials suspected of involvement in the 1988 massacre were released by the National Council of Resistance of Iran (NCRI) on September 6.

The massacre was the largest execution of political prisoners since WW2 with the loss of over 30,000 people, mainly from the People’s Mojahedin Organization of Iran (PMOI or MEK).

At a press conference in Paris, Mohammad Mohaddessin, Chair of the Foreign Affairs Committee of NCRI announced that the resistance forces were uncovering the names of all member of the 11 death commissions set up through Iran in the run up to the massacre.

Mohaddessin said: “In recent weeks there has been an unprecedented volume of information about the names of the martyrs and the locations of their mass graves has been sent to the Iranian Resistance by the relatives of the victims, officials who have parted ways with the regime and even from within the regime itself, and we plan to make them public in due course.”

A full list of those responsible who still wield considerable power is available on the NCRI website but here is a shortened list of the top offenders.

Mohaddessin said: “The United Nations must set up a Commission of Inquiry into this massacre and take the necessary steps to bring the perpetrators of this great crime to justice. The impunity must end. Inaction in the face of this crime has not only led to further executions in Iran, but has also encouraged the regime to spread its crimes to Syria, Iraq and other countries of the region.”

He quoted Amnesty International’s annual report on the death penalty which has a current death toll for the three-year reign of President Rouhani at almost 3,000.

Mohaddessin said: “The Iranian people and Resistance demand an international investigation into the 1988 massacre. They also demand that any economic relations with the regime be predicated upon a halt to executions. We call on the international community, in particular Western and Muslim countries, to condemn this great inhuman and un-Islamic crime. Silence in the face of this crime violates the principles of democracy and human rights and goes against the teachings of Islam.”

He added: “We call on all human rights organizations and institutions, and Islamic scholars and clerics, both Shiite and Sunni, to assist the Iranian people in their legitimate demand to bring the perpetrators to justice.”

This follows the publication of an audio file last month which features former heir-apparent Hossein-Ali Montazeri criticizing members of the Death Commission for the slaughter of political prisoners including 789 minors and 62 pregnant women; which is banned even under Iranian law.

AFP: A European court on Thursday annulled an EU...