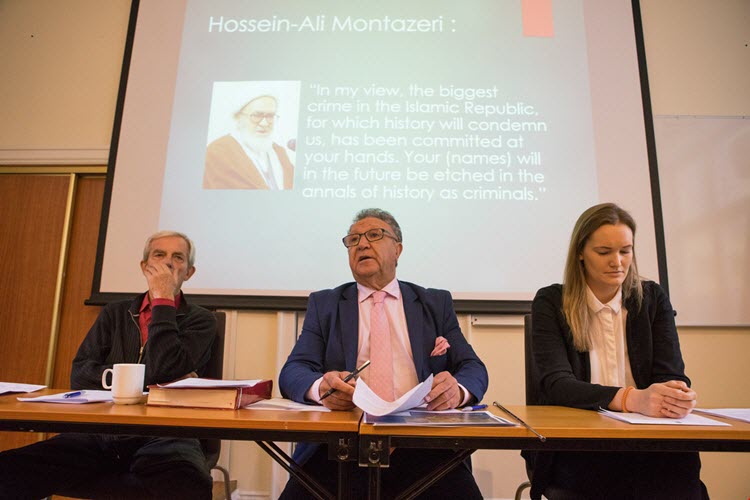 London, 6 November – On November 4, the National Council of Resistance of Iran (NCRI) reported that as of now, more than 110 senior Iranian officials involved in the 1988 Massacre of 30,000 political prisoners in Iran have been identified.

Members of the “Death Commissions” in Tehran and 16 other Iranian provinces still hold senior offices, because their identities and their role in the massacre has remained secret for nearly three decades.

The new information was revealed at a press conference organized by the Representative Office of the National Council of Resistance of Iran in Oslo on Friday morning, where, for the first time, the Iranian Resistance provided details of 213 regime officials who carried out the massacre, and who were involved in carrying out death orders in 35 cities throughout Iran. The Iranian Resistance has been compiling this information over the past three months, relying on sources from inside the regime and its vast social network inside Iran.

What’s been revealed is that scores of officials responsible for the 1988 massacre currently hold some of the most senior positions in Iran.

Mostafa Pour-Mohammadi, for instance, is the Justice Minister in Hassan Rouhani’s cabinet, but was also the primary Intelligence Ministry official involved in the 1988 massacre. On August 28, 2016, he publicly boasted about his role in the massacre and called it carrying out God’s commandment.

The representative of the National Council of Resistance of Iran in Nordic countries, Mr. Perviz Khazai, and former member of the Foreign and Defense Committee of the Norwegian parliament, Ingvald Godal, as well as Julie E. Kroepelien, a Norwegian lawyer, all took part in the press conference.

Since the victims of the Massacre were buried in mass graves all over the country, the total number of mass graves unknown, but there is no doubt that dozens of them exist. The Iranian Resistance has managed to confirm their existence in at least 12 Iranian provinces including Tehran, and has recently established details of eight mass graves which have never before been revealed.

Participants of the press conference reiterated that a UN inquiry is long overdue and urgently called to the Norwegian government for such an inquiry, because Norway, renowned for its championship of human rights and its principles, should lead the demands for a UN commission of inquiry into this crime against humanity.

At the press conference it was stressed that at the UN General Assembly’s current session, it is deliberating over a resolution on the human rights situation in Iran. It’s an appropriate time for Norway to demand that the 1988 massacre and the need for an independent investigation be stipulated in the resolution.

The Islamic Republic’s founder Ruhollah Khomeini handed down a fatwa, ordering the massacre of political prisoners In late July 1988. Accordingly, any political prisoner with affiliations to the PMOI must be executed. ‘Death Commissions’ were formed in more than 70 cities. They included a religious judge, prosecutor and representative of the Intelligence Ministry. During the last months of Summer, some 30,000 political prisoners, mainly activists of the PMOI (or MeK), serving prison sentences, and this includes persons as young as 14 was well as pregnant women, were massacred.

In August 2016, an audio recording came to light, on which Khomeini’s former heir, Hossein-Ali Montazeri, can be heard protesting to members of the Death Commission. The recording revealed much more information about this massacre and has shocked Iranian society.

For nearly three decades, Tehran had tried to keep the Massacre a secret, but tin recent weeks the issue has turned into a serious political and social crisis affecting the most senior officials of the regime.