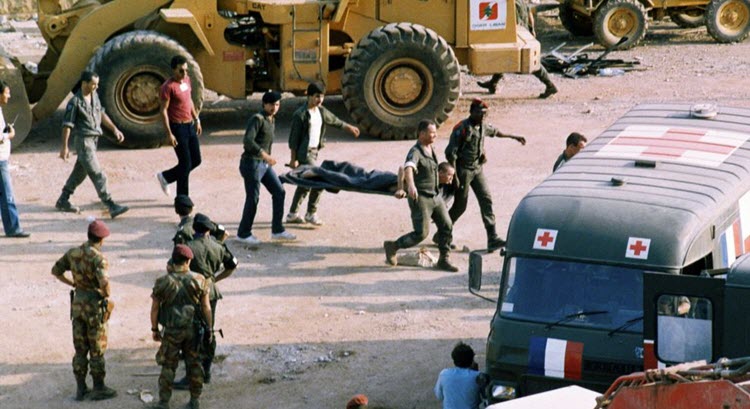 London, 6 November – On November 3, the National Council of Resistance of Iran reported that on November 4, the anniversary of the occupation of the United States embassy in Tehran, the deputy commander in chief of the Islamic Revolutionary Guards Corps’ (IRGC), Hossein Salami, spoke abut the mullah’s rule that, “today reaches to the North of the Red Sea in the Bab-el-Mandeb, is present in Yemen, and geographically extends to North Africa.” He also stated that the regime’s “presence in Syria, Lebanon, Iraq, and Yemen… is to keep the danger away from our land.”

In reference to the role of the IRGC in the bombing of the American Marine barracks in Lebanon, Salami, also said, ”In 1983, the flames of Islamic revolution flared among Lebanese youth for the first time, and in a courageous act, a young Muslim buried 260 United States Marines under the rebels east of Mediterranean Sea.”

These comments mirror some made by former Minister of the IRGC, Mohsen Rafighdoost, on July 20, 1987 as quoted by the State-run daily, Resalat, on July 20,1987. “The United States knows the explosives that mixed with ideology and sent up to 400 officers and Marines in the United States Marine Barracks to hell; both the TNT and the ideology behind it came from Iran.”

In another part of his speech, Salami threatened the United States, that if it does not fulfill its commitments, “the centrifuges will be active again, but this will not be a return to the position we were in when we ceased our nuclear activities. We will advance and again the nuclear cycle will revive completely in this country.”

He went on to accuse the United States of being the main source of human rights violations in the world, a cradle of terrorist groups, and said that the survival of the clerical regime is due to American wars in the region. “The Islamic revolution… benefits from developments that the United States pays for,” he said. “The United States has offered big achievements to the Islamic Republic through its conquests in Afghanistan and Iraq and paying heavy prices for them.”

Just one day prior to Salami’s speech, Ali Khamenei made remarks saying, “the young generation is losing its confidence about the future and the revolution and is distancing itself from the path of the Imam (i.e. Khomeini).” He continued, “Compromising with the United States in no way solves the problems of the country. None of the economic problems, political problems, security problems, and moral problems will be solved. They will be exacerbated. There are a dozen reasons for this. More than a dozen reasons can be raised to this effect. The nuclear agreement is the last case.”

Bloomberg: The Obama administration and arms control specialists in...