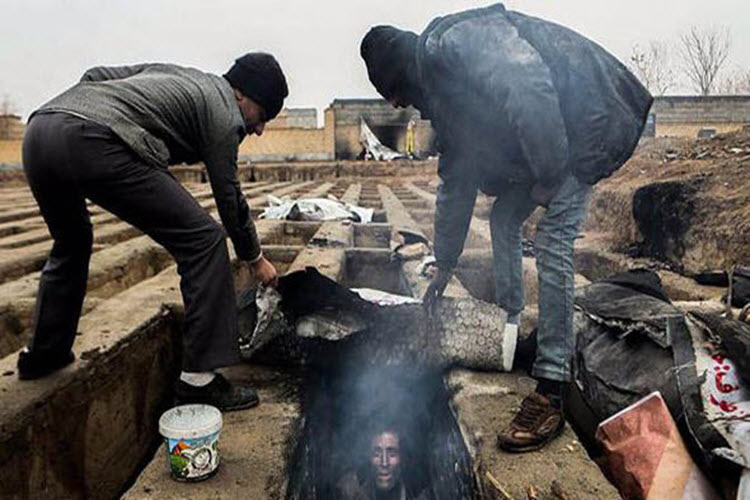 London, 29 Dec – On Tuesday, Shahrvand Daily, part of the Tehran Times, first reported on the struggles that force many of the poorest Iranian people, the homeless, to spend their nights in empty graves. Shahrvand Daily published the shocking footage, shot by Saeed Gholamhoseini in Shahriar, some 20 kilometers west of Tehran, which showed some 50 men, women, and children, living in the cemetery.

The photographs highlighted the atrocious way some Iranians must live, as many of these people have lived in the graves 10 years. In one of the photos, a grime-streaked man rises out of a grave, smoke from a fire providing warmth inside rising around him, an image that even shocked even the regime. Iran-based media outlet IRNA said that many human rights groups have been gravely alarmed by the report, as well.

This news, as reported in Asharq-Al Awsat, spread quickly over social media, where where many reacted with expressions of alarm and sadness. Oscar-winning film director Asghar Farhadi, so upset by the haunting images of the homeless staring into the camera from inside the unused grave slots, wrote an open letter to Iranian President Hassan Rouhani. “Today, I read a shocking report about men, women and children who are living in graves of a cemetery near Tehran in these cold nights and now I am full of shame and have tears in my eyes,” Farhadi wrote, and suggested that officials find out what life is really like in the communities they represent.

Iran’s unemployment is high, and its currency has fallen drastically against the U.S. dollar. Many citizens live in dire situations.

What is more shocking, however, if that following the reports, officials in Nasirabad, Shahryar, beat the homeless out of that cemetery on Tuesday morning, December 27.

An article entitled “Once again, trying to resolve the problem by wiping it out”, appeared in a state newspaper that reacted to the event, by writing: “Following a report in Shahrvand newspaper on people sleeping in empty graves in Nasirabad cemetery in Sharyar, city officials beat the homeless out of the cemetery in an urgent plan on Tuesday morning. This happened while the Governor of Sharyar Saeid Naji had promised in his interview with IRNA news agency that the situation of the homeless sleeping in Nasirabad cemetery in Shahryar will be specially dealt with.”

Ghanoon newspaper writes, “Interestingly, the city of Baghestan in which Nasirabad Cemetery is located, has the biggest number of drug rehab centers in Tehran province.”

When journalists and charity workers went to Nasirabad Cemetery on Tuesday December 27, they found the cemetery empty. A thorough search turned up one of the so-called grave-sleepers who them, “Leave us alone. A group of officials came here early in the morning and beat us out of here, now we don’t have even an empty grave to sleep in.”

Some 50 people slept in empty graves each night. Each grave accommodates up to four people. After being kicked out of the cemetery, the National council of Resistance of Iran reports that the homeless took shelter in an unfinished building nearby.

On Wednesday December 29, President Rouhani stated, “Who can accept that dozens of his countrymen who have suffered social ills take refuge to graves at night because of homelessness? We had heard that some due to addiction, poverty, and destitution, sleep in the streets, sleep under bridges,… But we had rarely heard of grave sleepers. We had rarely heard that a poor person, sleeps in a grave due to poverty and destitution.”

Now that this horror have been brought to light, the regime should spend some of the national wealth acquired as part of the Nuclear Deal to provide a simple shelter for these homeless people.

AFP: The US Treasury Department announced Friday that it...

AFP: Iran's economy is feeling no ill effects from...