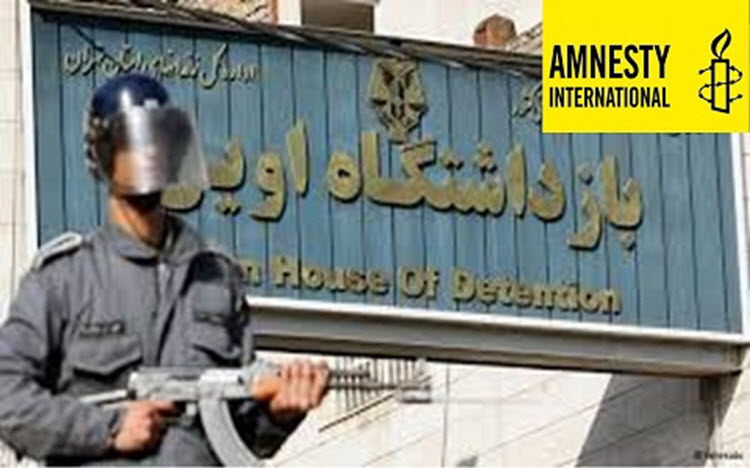 London, 14 Jul – The Iranian authorities recently arranged a rare visit for representatives of up to 45 foreign diplomatic missions from Europe, Asia, Africa and South America, to see the notorious Evin prison. Tehran conceded that the tour was an exhibit meant to counter negative reports about the prison, and display what they called the “excellent facilities”, including an in-house beauty salon, gym, library and restaurant.

In reality, however, research by Amnesty International, as well as other human rights organizations over the years, points to inhumane and unsanitary conditions at Evin Prison. The reports show chronic overcrowding, severely limited hot water, poor ventilation, and infestations of cockroaches and mice — a far cry from amenities like beauty salons and restaurants.

Amnesty’s reports tell a shortage of beds, forcing prisoners to sleep on the floor during cold winter months, and “barely edible” meals. Prisoners who can afford to do so, purchase food at their own expense from the prison store.

Evin Prison is a large complex of multiple buildings, and many areas of the prison remained off limits to the foreign delegates, who were only given access to a few of sections in buildings 4 and 7, which house wealthy prisoners who were convicted of financial crimes.These prisoners use their own funds to buy carpets, curtains, televisions, air conditioning units, kitchenware and other furnishings. The beauty salon, gym, library and restaurant are only accessible to prisoners in building 7.

According to Amnesty International, before the visit, authorities transferred prisoners from these sections to other areas to alleviate overcrowding and warned prisoners against expressing any criticism.

Many call the highly publicized visit to Evin prison a PR stunt, arranged by the Iranian authorities as a ‘cover up’. In fact, after the visit, Kazem Gharibabadi of Iran’s High Council of Human Rights claimed that prisoners in Iran enjoy “perfect access to medical care.” Claims like these are an insult to the hundreds of prisoners who have suffered behind bars at Evin prison. Amnesty International’s report stated that political prisoners are deliberately denied access to adequate medical care as further punishment.

The limited, distorted view the delegates were allowed, should have made it clear that they were being used for Iranian propaganda. Evin and other prisons should be opened up to independent monitors, including the UN Special Rapporteur on the situation of human rights in Iran, to conduct independent, unannounced inspections of Evin and other prisons in line with international standards.

Before Iran establishes confidence in the country’s prison system, overcrowding must be addressed, access to adequate food, water, medical care, hygiene and bedding must be ensured, ill-treatment must end, detainees must be treated with dignity and humanity, and unjustly imprisoned peaceful dissidents must be released.

New York Times: When President Bush and his advisers...