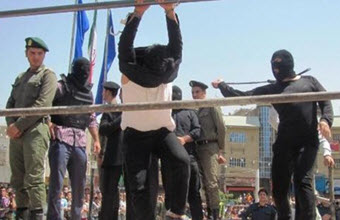 London, 3 Aug – Iran has a long history of human rights abuses- from imprisoning striking workers to flogging young people for attending mixed gender parties to assassinating political activists abroad- all so that the Regime can keep its weak grasp on power for a little bit longer.

Most recently, the Regime has been targeting people who threaten the economic dominance of the Islamic Revolutionary Guard Corps (IRGC), the financial arm of the Iranian military. This includes Karim Mohammad Aminzadeh, a Kurdish porter who bringing goods across the border into Iran. On July 25, he was shot without prior warning and died from his wounds.

The IRGC controls a large portion of the Iranian ports and the majority of Iranian imports and exports. As such, they are able to sell goods at well beyond their value to impoverished Iranians who don’t have any other choice. Aminzadeh was able to bring goods into the country to be sold on the black market at a much lower price, but the IRGC didn’t like the competition.

This is by no means a unique story and many supporters across the country have suffered similar fates.

Public flogging is a favoured punishment of the regime for almost any crime from adultery to being improperly veiled to stealing property.

Recently in Iran, three men were flogged for framing a young man for a crime he didn’t commit. While framing someone for a crime is undoubtedly bad, the young men were also sentenced to prison time and a fine which are more appropriate punishments.

Two further men, who were charged with abduction, were sentenced to prison, flogging, and the confiscation of their property. Again, no one is arguing that these men shouldn’t be punished for their crimes, just that flogging is the wrong way to go about it.

However, committing a crime isn’t the only reason to be arrested in Iran. The Iranian Regime has long been using the charge of “blasphemy” as a way of clamping down on freedom of speech and of the press. These arbitrary arrests have plagued striking workers, peaceful protesters, and even social media users.

Recently, a social media user was arrested on the charge of “blasphemy” and questioning the Regime, according to a report from the Western Tehran Cyber Police, while fifteen workers from the Sugar Cane Factory were arrested in their homes, in the middle of the night, for protests earlier that day about unsafe working conditions.

This is not a functioning justice system and the international community must address this and call on the Regime to halt human rights abuses.

The Media Express wrote: “The basic freedoms of the Iranian people have been suspended and suppressed to the point that journalists, editors, and even citizens wishing to speak out, risk imprisonment, fines, punishment, and even the death penalty for their activities. Even public concerts for members of the artistic community are being banned, impacting the cultural fabric of the nation. This regime has clearly grown paranoid and the resulting clampdowns reflect their fear of regime change.”