Message From Maryam Rajavi About the 1988 Massacre of 30,000 Political Prisoners in Iran 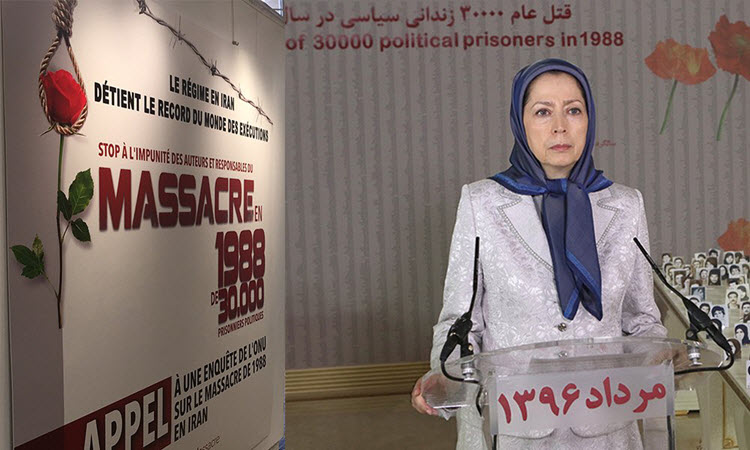 London, 19 Aug – President-elect of the National Council of Resistance of Iran (NCRI), Maryam Rajavi, had a message for the participants of the Paris Int District Exhibition of the 1988 Massacre of 30,000 political prisoners during 1988 in Iran.

This exhibition was the initiative of Mr. Jean-François Legaret, the Mayor of Paris municipality District 1. It was attended by several French mayors, including Armand Jacquemin, mayor of Moussy Le Vieux, Jean-Claude Jegoudez, mayor of Grisy-Sur-Seine, and Jacky Duminy, mayor of Ors, as well as relatives of the victims and people who spent years in Iranian prisons. Additionally, Scottish politician, Struan Stevenson, President of the “European Iraqi Freedom Association” and former President of the European Parliament’s Delegation for Relations with Iraq, took part in this exhibition and supported the call by the head of the opposition.

New information about the 1988 massacre has been revealed during the last year, including of names of the victims, as well as the locations of numerous mass graves. Also highlighed was that President Hassan Rouhani appointed Mostafa Pour-Mohammadi, member of the “Death Committee”, and one of the key officials in charge of the 1988 massacre, as Minister of Justice. His Justice Minister for his second term, Alireza Avaie, is another one of the perpetrators of the massacre, who was previous designated as a violator of human rights by the European Union.

Mrs. Rajavi speech is reproduced below:

I salute all of you. Your presence in this exhibition means that the restless conscience of humanity has not caved in to the mullahs’ demands over the massacre of political prisoners in Iran. The mullahs want indifference. They want you to close your eyes and ears and remain silent.

Since the inception of their rule 38 years ago, the mullahs’ demands can be summarized in the following sentences:

Here you are; this is our market and here is our oil and gas. Just when it gets to human rights and freedom of the people of Iran, turn your head away.

This is how they hanged our 30,000 political prisoners in Iran in days such as these in summer 1988, without any reactions by Western governments.

Those who remained silent over this tragedy, betrayed humanity because the mullahs found out that their crimes had no consequences. So, they continued by exporting their terrorism and fundamentalism abroad and drenching the Middle East in blood.

If in those days, the massacre had not been met with silence, today, the mullahs could not sink Syria in a whirlpool of blood.

The people of Iran want to end the impunity of those in charge of the massacre and hold them accountable. This has turned into the Iranian people’s most important political demand from the clerical regime.

The campaign calling for justice obtained new information about the slaughter, including a large number of names of the victims, as well as the locations of numerous mass graves which the mullahs had previously concealed. The people of Iran demand that the perpetrators of the massacre be held accountable and their impunity ended.

The Justice seeking movement in Iran managed to corner the mullahs.

Khamenei intended to put a member of the 1988 massacre’s Death Commission in the office of president, but the nationwide campaign calling for justice foiled his plans.

Nevertheless, the mullahs from either faction cannot and do not want to distance themselves from the massacre.

Over the past four years, the mullahs’ president Hassan Rouhani had appointed Mostafa Pour Mohammadi, one of the key officials in charge of the 1988 massacre, as Minister of Justice. He has now decided to appoint a new Justice Minister for his second term, but the new minister, too, is another one of the perpetrators of the massacre, by the name of Avaii who has been already designated as a violator of human rights by the European Union.

Rouhani’s cabinet includes the largest number of officials from the regime’s security and intelligence agencies. Several of the most senior officials of the Intelligence Ministry are among his cabinet ministers.

We have urged the UN High Commissioner for Human Rights to set up an independent committee to investigate the 1988 massacre.

The UN Security Council must set up a special tribunal or refer the issue to the International Criminal Court to arrange for the prosecution of the leaders of the Iranian regime.

I urge all governments to make their relations and trade with the religious fascism ruling Iran contingent on end to executions and torture.

And I call on all democrats and advocates of human rights in France and the world to join the Iranian Resistance to help it advance its cause by calling for an independent investigation to bring justice to the officials in charge of the 1988 massacre.

Thank you all very much.